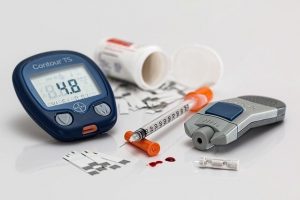 November is Diabetes Awareness Month, and we’d like to take a moment to present some helpful information about what diabetes is, what causes it, who is at risk, and ways to reduce that risk if possible. At Largo Clinic, we believe that better education can lead to a healthier population.

Diabetes is a chronic disease affecting blood sugar (glucose) and insulin. It has been diagnosed in approximately 29.1 million people in the United States – more than 9% of the population. Every year 1.7 million new cases of diabetes are diagnosed, and as many as 8.1 million people have diabetes and don’t know it. There are three main types of diabetes – type I, type II, and gestational.

Since the body cannot produce its own insulin with type I diabetes, those who have it need insulin injections every day in order to live. Without insulin, the body cannot convert glucose to cellular energy, and blood glucose will rise to dangerously high numbers – a condition known as hyperglycemia. Hyperglycemia, if left untreated, leads to diabetic ketoacidosis (also known as DKA), which can be fatal within days. Note: DKA should not be confused with the trendy “keto” diet, which is not the same thing.

Type II diabetes, also called “adult-onset diabetes” or “insulin-resistant diabetes,” is generally diagnosed later in life. It can develop due to several factors, including genetics, being overweight, having excess fat around the waist, and poor communication between the cells responsible for making insulin or glucose. Type II is the most common form of diabetes, affecting 27 million Americans and is usually treated with medication, diet, and exercise.

With this type of diabetes, the pancreas does produce its own insulin, but the body has become resistant to it over time. This desensitization to insulin results in the pancreas working overtime to create more and more insulin to keep blood glucose levels in check. Hyperglycemia is the primary risk with type II diabetes, as with type I, but hypoglycemia – low blood sugar – can also occur. Due to unnaturally high levels of insulin in the blood of those with type II diabetes, they must eat regularly to maintain adequate blood sugar for the insulin to convert to energy.

Diabetes usually develops slowly over time. As such, signs may not be as apparent as with other, more acute conditions. The most common symptoms of diabetes include, but are not limited to:

What You Can Do to Reduce Your Risk of Developing Diabetes

Although type I diabetes is not generally preventable, type II and gestational diabetes are much more controllable. One of the most significant factors outside of genetics is maintaining a healthy weight. Especially if you tend to carry your weight around your waist, eating a healthy diet filled with vegetables, whole grains, and healthy fats can dramatically lower your risk of developing diabetes. Moderate exercise several times per week can also lead to a healthier you, and make it easier to maintain a healthy weight.

We understand that if you are not in the habit of regularly eating healthy foods and exercising that it can feel like an impossible task sometimes. If you struggle with this, start small. Making little changes to your diet and exercise routine can lead to more significant changes over time. You may even feel more encouraged by setting several smaller goals than creating fewer big goals that take longer to achieve.

If you have questions about diabetes or would like guidance with creating a healthful diet and exercise plan, come by Largo Clinic or give us a call at (727) 517-1500.