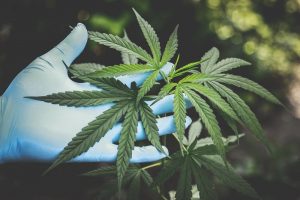 Since the 1990s, there has been a rise in overdose deaths related to the use of opioids within the United States. Over the last few decades, the death rates have risen and over 60% of drug-related deaths involve opioids claiming over 100 deaths a day in the United States. People can treat chronic pain using several medications, but opioids have been a constant go-to prescription for pain relief as they work to block pain signals within the body’s nerves. However, this has resulted in a public health crisis. There is a clear need to develop effective alternatives for pain relief and some researchers and doctors believe that cannabis could be a solution.

Opioids are almost synonymous with pain relief and are commonly prescribed as a medical treatment for chronic pain. Their highly addictive nature can cause patients to not realize they have become dependent on the drug until their prescription expires. For some, the lure of the medication is too strong and they turn to illicit drugs to function “normally” or to regain the rush of adrenaline they feel while under its effects. In fact, over 80% of those who suffer from an addiction to opioids were initially prescribed an opioid pain reliever by a doctor for medical treatment.

As we know, opioids are potent drugs that can dull sensations of pain and trigger intense emotions. Aside from being highly addictive, common side effects of opioid use include but are not limited to:

The potential medicinal properties of marijuana and its components have been the subject of research and debate for decades. In many cultures, it has a long record of being used to treat a variety of ailments and can be considered a safer, less addictive and destructive drug compared to opioids. However, that does not make it a perfect solution as each plant can vary depending on how it is grown, prepared, and stored.

Medical marijuana is made from dried buds and leaves of the cannabis plant and several of its properties such as THC and CBD have proven effective in treating conditions such as eating disorders, migraines, arthritis, chronic pain, seizures, mental illness, and addiction. There is some trial and error involved when prescribing medical marijuana to patients as it can be difficult to find the right ratio and intake method. Some patients respond better to inhalation over orals and others may require higher levels of THC instead of a typical 1:1 ratio.

In some cases, patients may also experience paranoia, anxiety, problems with memory, hallucination, delusions, and loss of personal identity.

Medical marijuana has yet to fully prove itself capable of treatment as there are still many concerns regarding the long-term effects and whether the lower risk of dependency trumps that of opioids considerably. There has been some research that states that the rate of opioid-related deaths has gone down in states where the use of medical marijuana laws has been passed reducing to some degree the opioid crisis, but it is far from solved. Given the relative safety of cannabis compared to opioid usage, it can be an effective and alternative method of treating chronic pain. It is always best to consult with your health care provider on your concerns for treatment and which would work best for your needs, condition, and goals. For more information on the side effects of marijuana and opioids, please contact Largo Clinic today.