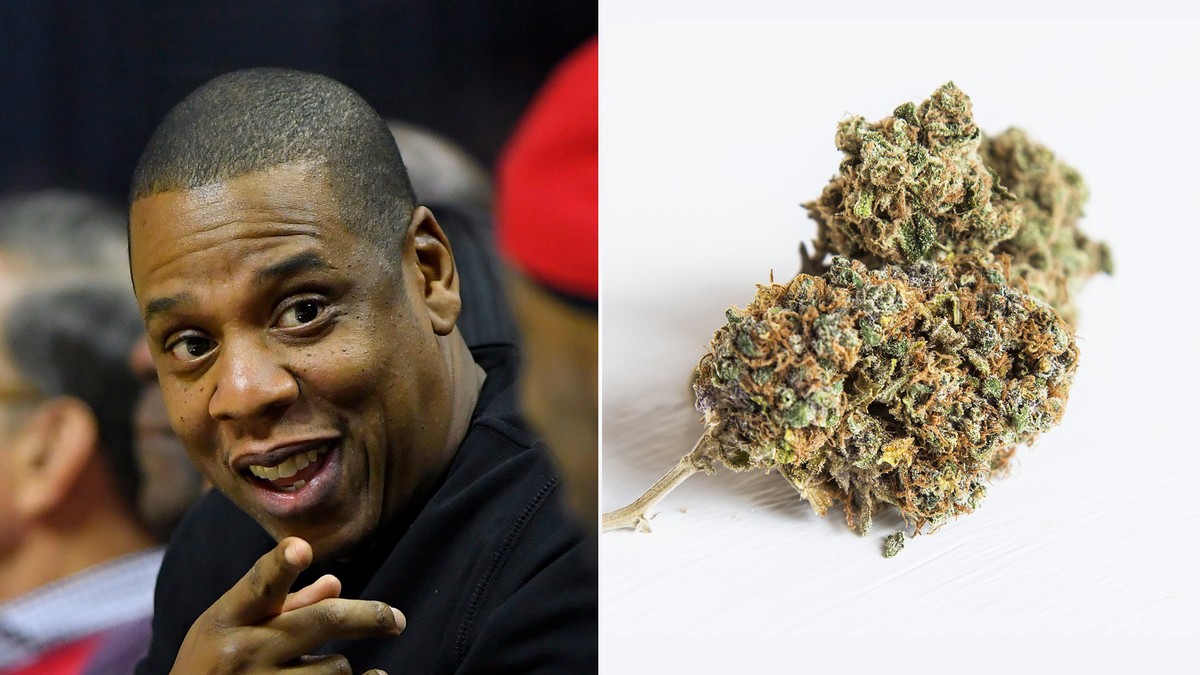 “We obviously have aspirations to go beyond California into other states over the next couple of years, and we really believe that Mr. Carter’s creative genius and his ability to really have the pulse of what a cultural movement is will be able to help Caliva do that,” Dennis O’Malley told CNBC’s Squawk Alleylast week. He noted the company is making “no small plans.”

Jay-Z is just the latest in a string of celebrities including Montana, Whoopi Goldberg, and Willie Nelson who’ve jumped on the legal weed bandwagon. And while Canadian companies have also partnered with stars, including Seth Rogen, Wiz Khalifa, Martha Stewart, and Snoop, they have to be more careful of how they frame these alliances.

According to federal regulations in Canada, celebrities can’t give a testimonial about a licensed producer’s product, talk about its price, or say anything about it to minors. They can harness what’s known as “the halo effect” and hope that star power rubs off on the brand.

These are just a few of the rules that, according to cannabis industry and observers alike, leave Canadian cannabis companies at a disadvantage. This presents a huge challenge because they’re up against U.S. companies that are gearing up for a global fight, with big budgets and a deep bench of executives who have already established successful retail brands—such as Victoria’s Secret, Home Depot, and Pepsico’s Frito-Lay.

In what is already an uphill battle, the industry is calling for clarity and a softening of rules regarding how the industry can promote itself online and on social media, ahead of the next wave of cannabis products to be legalized, which includes edibles and topicals.

The size of the American legal market—which isn’t even legal federally in the U.S.—already slightly eclipses Canada’s. Even though total cannabis demand in the U.S. in 2017 was an estimated $50 billion USD, only about $6 billion of that was from legal sales, mostly from Washington, California, and Colorado. Compare that to the Canadian market which is estimated to reach $5 billion in 2021, according to cannabis research firm Brightfield Group.

Waiting for U.S. federal switch to be flipped

It is widely believed that the status quo will change and weed could be decriminalized across all states at some point in the near future. On Wednesday, U.S. lawmakers debated reforming pot laws in what was called a “historic” hearing. Republican representative Tom McClintock from California said “marijuana decriminalization may be one of the very few issues upon which bipartisan agreement can still be reached in this session.”

Cannabis marketing expert Kayla Rochkin said it’s just a matter of time before America loosens the rules federally. As vice president of marketing for TREC Brands, she works with a portfolio of cannabis companies and has seen firsthand how challenging it is to push a product, without being able to talk in-depth about the product itself to the public. But as the clock ticks down, she said Canadian companies are losing whatever first-mover advantage they may have had because of strict rules limiting brands from touting their advantages over rivals.

“The claims that those U.S. brands are making in terms of benefits are huge. They can associate with the California surfer lifestyle, or the super-premium high-end brands that you’d see in the Barney’s cannabis accessories store,” Rochkin said.

Canada’s Cannabis Act prohibits licensed producers from promoting themselves “in a manner that associates it or the brand element with, or evokes a positive or negative emotion about or image of, a way of life such as one that includes glamour, recreation, excitement, vitality, risk, or daring.”

Alessandra Hechanova, is the digital marketing manager at Canopy Rivers. In another industry, she would be focused on the product—how it works and what advantages it offers over rivals. Complying with current rules means she finds creative workarounds.

“We make it more people-centric rather than product-centric, so mostly success stories around operations, focus on the founders,” she said. “It’s up to a lot of interpretation for lawyers and the level of risk that companies are willing to take based on how they’re willing to interpret the Cannabis Act.”

One of Tweed’s Instagram ads for Father’s Day is simply an image of a joint with the copy, “Ditch the tie. He’s been getting ties for years. Time to shake things up.”

Basically anything that evokes any kind of emotion is forbidden. Lawyers and marketing managers alike have tried to make sense of the sweeping rules. Adding to the confusion is the seemingly arbitrary way in which they’re enforced.

Last year, an educational site run by the New Brunswick government was found non-compliant with federal rules because it featured images of people enjoying, and perhaps glamorizing (by taking a selfie and smiling), cannabis use.

Health Canada would not give comment for this article, but provided VICE with its Regulatory Impact Analysis Statement, which indicates that it will continue to monitor the industry and “take timely actions” against those whose activities “pose an unacceptable risk to public health and/or public safety or do not comply with the applicable requirement.”

There is a sense of urgency regarding clarification of those rules, according to the industry. The time is right for a loosening of restrictions around what cannabis companies can and can’t say in ads and social media, with “cannabis 2.0” coming later this year.

The federal government recently unveiled its plan for legalizing cannabis edibles, beverages, extracts, and topicals which are slated to be available for consumers by mid-December. Financial firm Deloitte estimates this next stage of cannabis legalization will create a new consumer market worth more than $2.5 billion CAD a year and make more money for retailers than existing cannabis products.

For context, that’s less than the state of California’s legal market in 2018 alone, which was $2.5 billion USD. According to Arcview Market Research and BDS Analytics, demand for legal cannabis in California is forecast to reach $5 billion USD by 2022, which puts it in line with the size of Canada’s total market.

The Deloitte study cites the fragmented, state-specific rules as a major drag on American companies, which presents an opening for Canada. The report states that “our view is that edibles will prove to be a more successful segment in Canada, in part because the Canadian market is currently more scalable than the U.S. market.”

With the onset of “cannabis 2.0,” Hechanova, sees an opportunity for Canada to work its edge over the U.S.—if rules around promotion are revamped.

“That’s something that would be important for LPs in Canada to communicate because we have low limits on THC and how much psycho-active ingredients are allowed in edibles and beverages,” she said.

In Canada, cannabis edibles and drinks can’t contain more than 10 mg of THC per serving, which is enough to get first-timers high. California, Washington, and Colorado have instituted similar THC limits.

According to cannabis industry analyst Deepak Anand, Canada should learn from mistakes made south of the border.

“If you look at U.S. states that have legalized cannabis, that’s one of the things that they say they should have done before. In Denver, Colorado, for example, we saw quite a few hospitalizations because quite a few people had consumed too much of this product and they didn’t know what to do with the high,” he said. “They were scared or perhaps paranoid from the use. Having education would allow users to get ahead of that.”

Another reason to un-muzzle the industry, is that it’s expected to attract first-time and novice cannabis users, who will need information and education to navigate the experience.

“Dosing is a lot more complicated with these types of products and… [those] aren’t currently using cannabis products are likely to look for information online and social media might be the first place they turn to,” said Hechanova.

Social media platforms themselves have their own rules around cannabis messaging, with Facebook and Instagram being the most strict and Snapchat the most permissive. But the industry is calling on the federal government to give some thought to changing the rules in light of the changing product mix, which is expected to be significantly more lucrative and attract a larger number of first-timers.

The regulations around cannabis are modeled on rules around tobacco, but from a marketing perspective, they’re leagues apart from the rules governing alcohol, which is also legal and only for people who are the age of majority.

“A lot of advertising and promotion in general is in the eye of the beholder. Without clarification from Health Canada or some independent third party, about what’s OK and what’s not OK with concrete examples, is really hard to figure out from a marketing perspective and stay within the boundaries,” said Rochkin.

“The biggest challenge is that there’s a whole bunch of products already on the illicit market that make all sorts of claims, including some products that I’ve seen that say they’re approved and licensed,” he said.

As Canada’s black market for cannabis thrives, and American rivals continue to grow their brands in key U.S. jurisdictions, Canada’s cannabis industry said it hopes the federal government will give it a fighting chance to compete.

“This is definitely something that we’re going to look back on and say I wish we had done more and allowed the industry to flourish more than it did. As soon as the U.S. federal switch is flipped, things will very quickly change and we will lose our advantage as this sort of global dominator on cannabis if we aren’t working very closely with the industry today on allowing changes on the marketing, packaging, branding side,” said Anand.