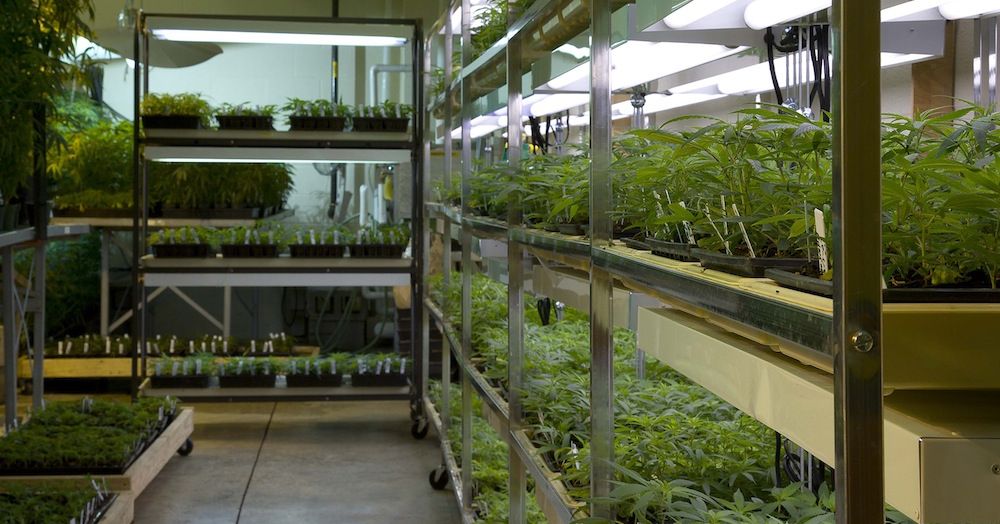 For most of her life, Elizabeth (who requested we use a pseudonym) avoided marijuana. She came from a conservative family of the “just say no” variety, and her first experience with the drug at a party in her late 20s made her want to curl up into a ball and hide. “The whole world seemed frightening and loud,” she says. “Everyone was sitting around and laughing and having fun, and I was becoming paranoid.”

But she also struggled with anxiety and had a high-pressure job; complications with insurance made it difficult to get Xanax. Elizabeth started hearing about the anxiety-relieving benefits of marijuana and learned about different strains of the plant, like sativa and indica. Maybe it wasn’t all marijuana that would cause her to panic. If she could find the right strain, maybe that would do the trick.

Elizabeth ended up using a kit from EndoCanna Health, which promises to test your DNA to determine which strains of marijuana might be helpful and which might make you afraid. The idea is that variations in genes can affect how our bodies break down different types of marijuana, and genetic testing can match us with the one that has the fewest side effects. “Our mission is to demystify how cannabis interacts with human DNA,” EndoCanna CEO Len May told me. “We want people to feel much more confidence in the way they include cannabis in their health and wellness regimen.”

More than any other drug, marijuana has been linked to politics, from xenophobic attitudes to the injustice of mass incarceration

May’s team referred me to Elizabeth and, for her, it seemed to work. She had started experimenting on her own anyway, but the report went further, suggesting that she try tinctures and providing optimal ratios. “Taking the test made me feel like I wasn’t just playing roulette with what I was taking,” she says. She feels more relaxed in general and no longer gets paranoid from pot.

Elizabeth is a success story for the industry, but experts in the field say that it’s simply too early to know whether these marijuana genetic tests work. “We’re not really at that point yet,” says Saeed Alzghari, director of clinical pharmacy at Gulfstream Diagnostics. There are only a few trials studying marijuana and genetics and most of them have very few participants. “It’s still not enough to say whether these results are going to be meaningful for practitioners,” adds Alzghari. We certainly don’t know enough to recommend exact ratios.

The 2016 election was a tipping point for marijuana legalization. This year’s midterm elections offered residents of Utah and Missouri the chance to legalize medical marijuana in their states. As marijuana legalization spreads, more and more companies will be like EndoCanna: based on some science but with claims that stretch beyond the conclusions of established research.

Once, marijuana was the target of Reefer Madness panic, even though there’s no evidence that it’s caused a single death. Politicians like Attorney General Jeff “good people don’t smoke marijuana” Sessions are still stuck in this narrative, so it’s little wonder that people are pushing back. As a result, we have cannabidiol (CBD) in everything, even though we’re not sure if it’s doing much. One cannabis dispensary will soon offer “luxury products.” Another company claims it’s “one of the first to bring AI, machine learning and the ‘Internet of Things’ to the cannabis market.” The “largest cannabis dispensary superstore/entertainment complex in Vegas” just opened. All the while, the research lags behind. It’s hard to study marijuana, and there’s money to be made in the business. That’s an unfortunate combination that makes it exceedingly hard to separate the truth from the hype.

by trying to keep us “safe” and refusing to reschedule, the DEA is letting us be drowned by hype

States that have legalized medical marijuana draw upon a growing body of research. Studies have investigated whether marijuana can be helpful for conditions from nausea to pain to Parkinson’s disease and inflammatory bowel disease. Some results are encouraging, but in many cases, the evidence for health benefits is either not very strong or is quite limited.

Marijuana is frequently touted as a treatment for chronic pain and PTSD, but that claim is questionable, according to a study published in Annals of Internal Medicine last year. The authors note that between 45 and 85 percent of people who use medical marijuana want to manage their pain, but an analysis of 27 studies doesn’t support that cannabis is really helping. When it comes to PTSD, there was too little conclusive data. A different study from the Journal of the American Medical Association found high-quality evidence that marijuana can help conditions like multiple sclerosis — but acknowledged that the drug is also used in many cases where the evidence is insufficient.

There are a lot of problems with the methodology of cannabis research, says Sachin Patel, a cannabis researcher at Vanderbilt University who was not involved in the study. (The study authors work with the Veterans Health Administration, which limits their ability to give interviews on this topic.) For example, many studies only look at participants who self-report using cannabis, which provides much weaker evidence than randomly assigning a group of participants to take either a cannabis product or a placebo. Additionally, many studies only look at the short-term evidence which, of course, won’t tell us much about chronic conditions. It’s not that we know cannabis isn’t helpful for issues such as PTSD or chronic pain, Patel adds. It’s simply that existing research doesn’t provide strong evidence that it does. Research is promising, not definitive.

In short, the public perception of marijuana benefits and risks doesn’t align with the data, according to a study from this September, also published in Annals of Internal Medicine. “Absence of evidence is not evidence of absence, but if something is being marketed as having health benefits, it needs to be proven to have health benefits,” says Salomeh Keyhani, a professor of internal medicine at UC San Francisco and an author of the study. “I think it’s very dangerous to be asserting that things are very beneficial without thinking about risks.” For example, 66 percent of the 16,000 Americans surveyed do believe that marijuana has big benefits for pain, and 9 percent of Americans believe marijuana has norisks. Nearly 30 percent believe that smoking marijuana prevents health problems. And 22 percent of Americans surveyed believe that marijuana is not at all addictive, which is not true.

Roughly 10 percent of people who start smoking marijuana become addicted, says John Kelly, a Harvard University psychiatry professor who studies addiction. That means that they’ll experience withdrawal symptoms like irritability or cognitive fogginess and behave compulsively to make sure they have access to the drug. “I don’t think anyone in the clinical realm has any doubt that it’s a psychoactive drug that can cause addiction,” says Kelly, “ and marijuana addiction is growing.” Young people, especially, are more likely to become addicted, and Kelly thinks that the growing potency of cannabis may be making things worse. None of this is to say that marijuana addiction is worse than being addicted to any other drug, and Keyhani points out that there are methodological problems with research on the harms of cannabis, too. Marijuana comes with both benefits and risks and there’s a lot we don’t know.

Marijuana is never just marijuana. More than any other drug, it has been linked to politics, from xenophobic attitudes to the injustice of mass incarceration. The way that marijuana has always been a lightning rod for activism can make it hard to see beyond the symbolism. Our government isn’t making it easier.

For the past 50 years, the Drug Enforcement Administration (DEA) has classified marijuana as a Schedule I drug alongside heroin, LSD, and cocaine — meaning it is considered to have “no currently accepted medical use and a high potential for abuse.” As one example, scientists who want to study the substance must use federally approved samples, which aren’t as potent as the offerings readily available to consumers. Though the agency has repeatedly refused to reschedule marijuana, two years ago, it did promise to give licenses to more universities to do marijuana research. However, Stat hasreported that the DEA did not grant these additional licenses and has stopped accepting applications for them, impeding progress again.

The irony is that by trying to keep us “safe” and refusing to reschedule, the DEA is making us less safe by letting us be drowned by hype without quality evidence either way. When it comes to research, many of the methodology problems that Patel points out are the result of government roadblocks.

One way around the bureaucracy is to go through a different type of bureaucracy. Earlier this year, the US Food and Drug Administration (FDA) approved GW Pharmaceuticals’ Epidiolex, a drug that contains CBD and treats severe childhood epilepsy. As a result, the DEA rescheduled Epidiolex specifically — though not CBD or cannabis in general — to low-risk Schedule V. With the move, the DEA is showing a “fair amount of deference” to the FDA, Andrew Ittleman, a partner of the law firm Fuerst Ittleman David & Joseph, told The Verge. “The DEA is saying, ‘If you’ve satisfied FDA, you’ve satisfied us.’”

Still, gaining FDA approval is a lengthy and expensive process, and not everyone who wants their product to be legal cares about medical approval. And though the regulatory dam is starting to crack, the rescheduling of cannabis doesn’t look like it’s anywhere on the horizon. This is a dangerous place to be. There are lobbyists on both sides and plenty of money pouring in, but until it becomes easier to study marijuana and conduct high-quality research, it’s hard for the public to know what’s best.