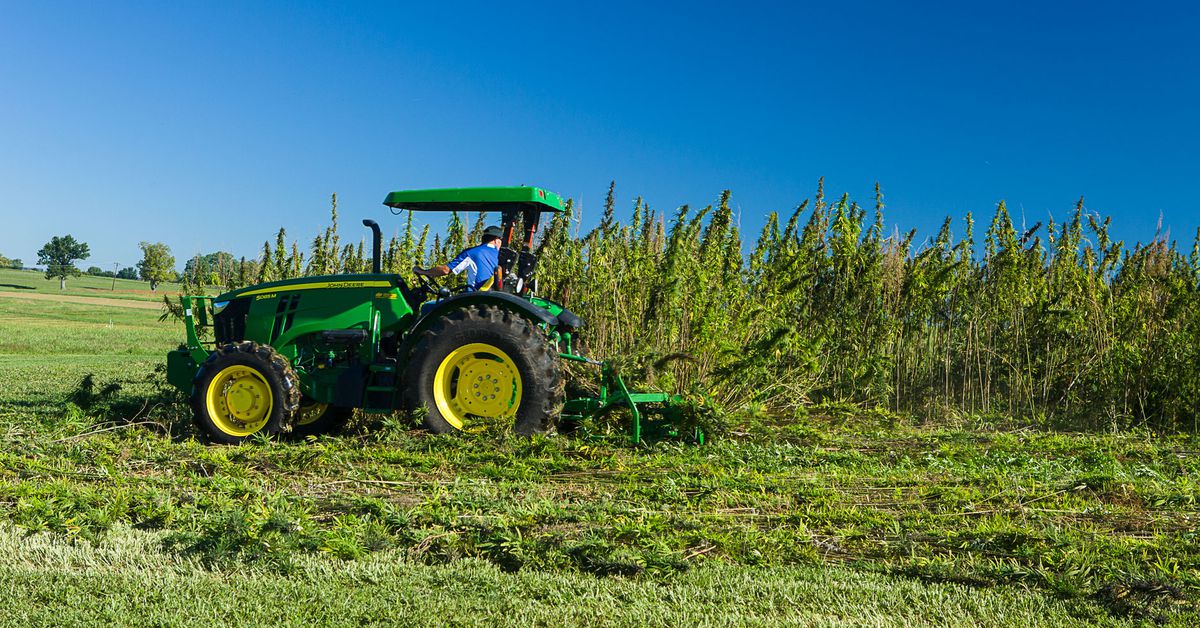 Congress just reached an agreement on proposed legislation that could make hemp legal to grow in the United States for the first time in nearly a century. Hemp may be derived from the same plant as marijuana, but it doesn’t make anyone high and is commonly used in food, fuel, and bracelets. The new legislation officially acknowledges the difference between the two.

Technically speaking, hemp is a variety of the cannabis plant that contains less than 0.3 percent tetrahydrocannabinol (THC), the psychoactive ingredient in marijuana. Though its derivatives have been used for everything from textiles to medicine, hemp is currently everywhere in the form of a trendy ingredient called cannabidiol (CBD). Manufacturers promise that CBD will alleviate pain and depression and other health issues (despite a lack of solid evidence for many claims), yet CBD has lived in a legal gray area for years because of the tricky legal history of hemp.

Not only have cannabis derivatives like hemp been effectively banned in the US since the Marijuana Tax Act of 1937, other legislation has categorized marijuana products as dangerous Schedule I substances like LSD and ecstasy. Then in 2014, Congress passed legislation that approved small pilot programs for growing hemp, though to do so, farmers still needed approval from the Drug Enforcement Administration. (This 2014 provision was part of the Farm Bill, a massive piece of legislation that sets policy around food and agriculture. The Farm Bill needs to be renewed every few years, so the new decision to legalize hemp is part of the proposed 2018 Farm Bill.)

Despite this, there was some debate over whether derivatives of the hemp plant, like CBD, were reallyexcluded from the Controlled Substances Act, according to Shawn Hauser, a senior associate at cannabis law firm Vicente Sederberg, hence the legal gray area. “The 2018 bill actually goes in and amends the Controlled Substances Act to make very clear that CBD derived from hemp would not be considered a controlled substance,” she says.

This is “a pretty important step forward in terms of federal government’s recognition of what CBD is and what its lack of potential harm or risk is,” says John Hudak, a senior fellow at Brookings Institution and author of Marijuana: A Short History. There are likely to be more CBD products now, but that still doesn’t mean that everyone can just grow hemp in their backyard. Farmers will no longer need DEA approval, but there will still be significant federal and state restrictions on hemp products and growers will need to be licensed and fulfill other requirements developed by the US Department of Agriculture. “It’s not going to be this free-for-all that some people imagine,” Hudak says.

Proponents of legalizing hemp argue that it provides an opportunity for new jobs and economic growth, especially because hemp is a versatile plant that can grow in various climates. For example, Kentucky — the state of Republican Senate Majority Leader Mitch McConnell, who sponsored the hemp provision — is one of the best places to grow the plant. “Kentuckians think that this could help replace coal miner jobs in eastern Kentucky and could jump start local economies that have really suffered as economic transition has happened,” Hudak says.

At the same time, critics and hemp activists point out that the language of the bill prevents people with drug-related convictions from ever taking part in the hemp business, which is a loss for racial justicegiven that these drug convictions disproportionately have targeted poor people and people of color. Plus, this prevents growers with marijuana experience from entering the labor market. Growers will also continue to face environmental issues such as water use and energy consumption as hemp cultivation expands from smaller pilot projects to larger-scale agricultural enterprises.

Justin Strekal, political director of the pro-marijuana group NORML praised the agreement but said new regulations are needed. “For years, many of the producers of these products have navigated in a grey area of the law — manufacturing products of variable and sometimes questionable quality and safety,” Strekal stated. “Now it is time for lawmakers to craft simple benchmark safety and quality standards for hemp-derived CBD in order to increase consumer satisfaction and confidence as this nascent industry transitions into a legal marketplace.”

The House and the Senate both need to officially vote on the new legislation, which is expected before the end of the year. As Hauser says: “We’re still in infancy at the precipice of a new business which other industrialized countries have had for decades.”