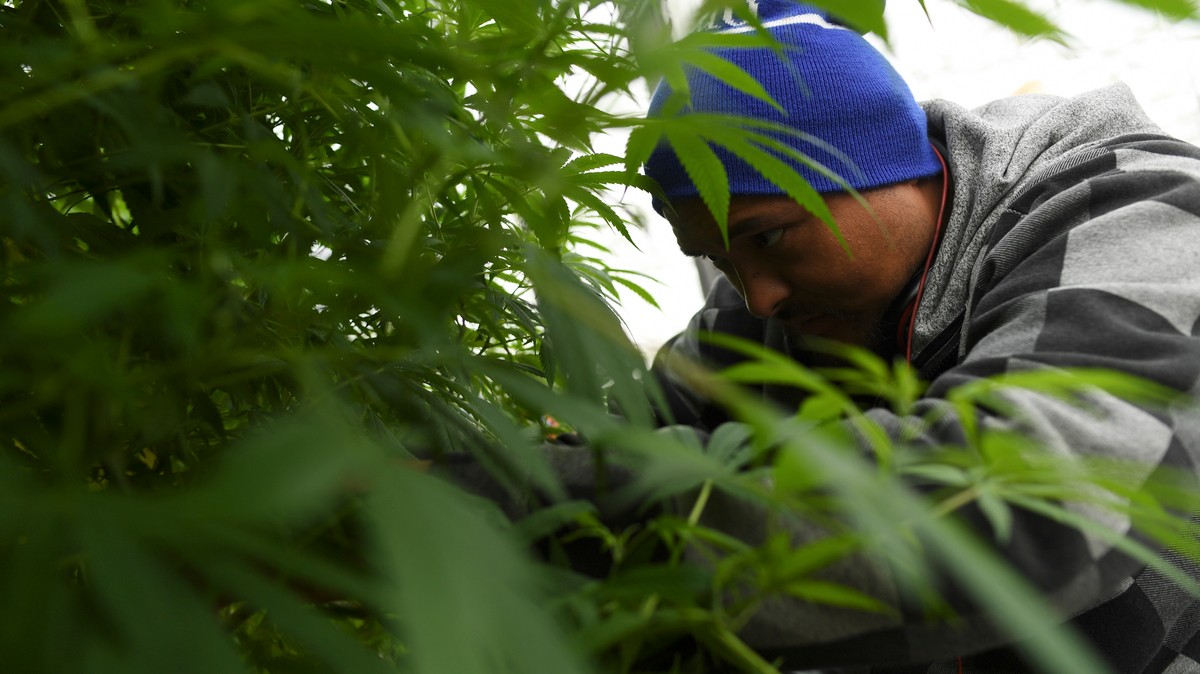 A trimmer works on a hemp farm in Colorado. Photo by RJ Sangosti/The Denver Post via Getty

About an hour and a half north of Indianapolis lies the small town of Converse, Indiana, where, for over 175 years, Mark Boyer’s family has tended the same piece of land. While Boyer mostly grows row crops—corn, soy, and wheat—he’s working on diversifying into hemp. Seven years ago, he built his own cold press and started producing seed oils like sunflower and canola under the name Healthy Hoosier Oil. The 2014 Farm Bill allowed hemp to be grown for research purposes, and in 2018, Boyer became the first farmer in Indiana to raise it as a row crop in conjunction with the Purdue University Hemp Project.

Hemp is a variety of cannabis with low levels of tetrahydrocannabinol, or THC—the chemical that gets teenagers high and makes legislators nervous. Hemp fans boast that the crop, which was banned in the US along with marijuana in 1937, has over 25,000 uses, more even than the multiverse created out of corn and soy. Tens of thousands of US farmers like Boyer—facing increasing pressure from shrinking profit margins—hope that it could be the next big cash crop, and both advocates and farmers earned a major victory when the plant was legalized at the federal level under the 2018 Farm Bill, thanks in part to support from Republican Kentucky Senator Mitch McConnell.

But though many tout its benefits, Boyer has struggled to make hemp work as a crop, underscoring some experts’ concerns that hype about the plant is outstripping reality. Hemp has its uses, but it’s hard to grow and may become harder as climate change hits the Midwest.

The National Hemp Association, a nonprofit founded in 2014, states on its website that hemp “grows well almost everywhere,” requires little fertilizer or pesticides, and can grow in the same plot “twenty years in a row without any noticeable depletion of the soil.” It’s also the “ultimate source of nutrition” and can feed populations during famines, according to the site’s FAQ.

Hold-ups in the Indiana state legislature have kept Hoosiers behind their neighbors in Kentucky, which has already approved over 1,000 farmers to grow hemp. But Jamie Campbell Petty, co-founder of the Midwest Hemp Council, said at least 25 Indiana farmers will gamble on hemp in 2019, growing on about 1,000 acres. According to Petty, it’s possible for farmers to make more money per acre than they could with corn or soybeans, and she’s encouraging them to try out the diversified income stream.

Across the Midwest, farmers need a lifeline. Seventy-five percent of the region’s agricultural land, which contributes $76 billion to the US economy, is devoted to corn and soy. Those crops are facing price declines from a combination of the ongoing trade war with China and global competition, and experts predict more bad news in the form of lower crop yields from the impacts of climate change and specialization.

“A lot of farmers have been traditionally trapped in the rotation of corn and soy,” said National Hemp Association President Erica McBride Stark. “Hemp is not only a great rotational crop, but it’s also a great cash crop for struggling farmers.”

But for Boyer, growing his experimental plot—just 12 of his 1,250 acres—wasn’t as easy as he expected, or as advocates heralded.

“I’d fallen into the trap of believing hemp germinates on a rock, requires no fertilizer, and that unicorns fly out of it,” Boyer said, “but my experience was dramatically different.” He said the crop requires unique handling and is prone to white mold—its near 100-year hiatus as a cash crop has hurt its ability to resist disease. And there aren’t any approved pesticides or insecticides that could protect vulnerable seedlings.

Hemp doesn’t like “wet feet” either. The Purdue University Hemp Project’s experimental demonstration plots have shown that more rain at the time of planting often means a lower yield. And germination rates—or how many hemp seeds actually become hemp plants —have been erratic, from 20 percent of the seeds becoming seedlings to, at best, 90 percent. Janna Beckerman, a plant pathologist at Purdue who helps run the hemp program, worries that new farmers, excited about the promise of a new crop, could lose several thousand dollars on seeds with low germination rates.

“In our part of Indiana, an issue is climate,” said Beckerman. “It might be too wet for us to grow hemp.”

Those conditions may only grow worse: A 2018 report co-authored by Beckerman predicts that by the middle of the 21st century, rainfall, temperatures, and carbon dioxide levels will all increase in Indiana, exacerbating the wet effects of a warm winter and early spring. Hot summers, meanwhile, will increase weed, pest, and disease pressures. The report didn’t study the effects of these trends on hemp, but Beckerman suspects much of the impacts on corn and soybeans, which suffered from a drought in 2012 and heavy rain in 2015, could be even more severe for hemp.

Beckerman worries that as family farms disappear and industrial farms grow bigger and more specialized, farmers with fields that may seem large—several hundred acres—are struggling, and may turn to hemp without fully understanding the plant or the risks associated with growing it. She hopes to serve as a reality check.

“I’m really worried they’re going to bet the farm on this,” said Beckerman, who frequently fields calls from farmers hoping to invest in hemp. “Once something is a successful crop, people jump into it and then they flood the market, undermining their own price constructs.”

Stark, of the National Hemp Association, is also tempering her advice to farmers. She recommends starting small—one to five acres—and making sure hemp growers have an outlet and a buyer for their product before scaling up to large, industrial-sized operations. She expects to see hemp prices drop initially before evening out in the next year or two because “acreage is going to expand so rapidly.”

Stark also admits her website’s claims may “need to be refined a little bit” based on challenges farmers have seen in their fields. “Having it grow and be commercially successful aren’t the same thing,” said Stark. “There’s a bit of a learning curve.”

Boyer is still excited for the crop’s potential. He’s expanding his hemp operation to 100 acres in 2019, and adding hemp seed oil to his line of Healthy Hoosier products. He has three kids all under ten, and hopes the family farm will live on through a seventh generation. “We’re looking at the long term,” he said. “We want to be able to pass on a farm that’s financially stable, so it’s important to add diversified crops to our rotation.”

Beckerman said the solution Midwestern farmers should look for is diversification, not just the promise of hemp as a cash crop. “Expecting hemp to fix agriculture is crazy,” she said. “ It’s just a plant. It’s a beautiful plant, but it’s just a plant.”