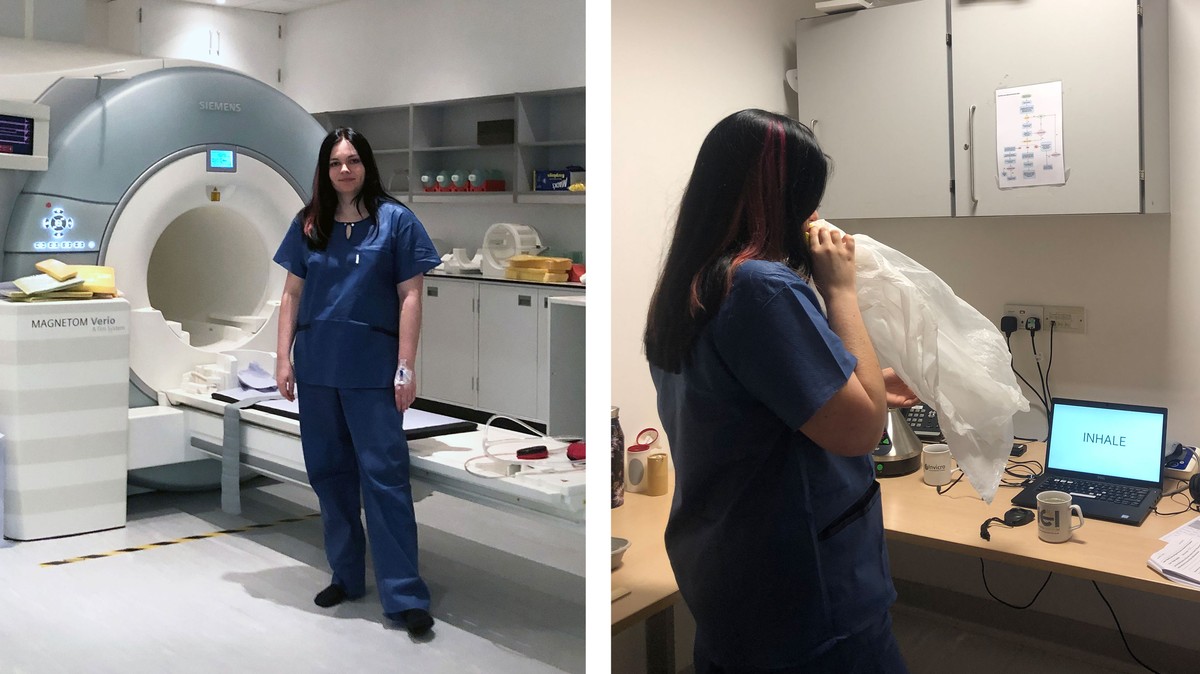 Every so often, life throws you a curveball that makes you wonder how easy it would be to sell a kidney. In my case, it was after quitting a retail job with an extremely petty manager. I had nothing concrete lined up, so reasoned that it might be time to click on one of those omniscient Facebook advertisements offering cash in exchange for taking part in a scientific study. I’d like to say that this is the weirdest thing I’ve ever done for money, but then I once wrote a beauty article that required me to apply makeup with a condom.

The ad led me to CannTeen, a study at University College London (UCL) exploring how cannabis can impact mental health and cognitive abilities. “We are also interested in finding out whether different types of cannabis with different mixes of cannabinoids might have different effects,” Anya Borissova, one of the clinical research fellows working on the trial, tells me.

She continues: “The reason it’s important to get more information about this is that it could then be used to guide policy-making and to help people using cannabis to make safer choices about what types of cannabis they use.”

Helping people make better choices about their cannabis use? Contributing to research that could push the British government to consider legalizing weed? And getting paid for it? The CannTeen trial seemed like a no-brainer—I signed up right away.

The experiment is spread over three sessions: one that uses CBD, one THC, and one with a placebo. Participants are required to inhale marijuana vapor, then complete a set of tasks in an MRI scanner. The researchers also take four blood samples during each session which admittedly doesn’t sound great, but is definitely better than having your organs harvested.

“We know that cannabis has different positive and negative effects for different people,” explains Borissova. “We’d like to find out whether different types of cannabis (with different mixes of THC and CBD) might affect teenagers and adults differently in terms of their brain functioning, and how we can link this up with brain activity that we can see through an MRI scanner.”

A cannula is fitted to allow blood samples to be taken throughout the experiment.

I arrive at UCL’s clinical psychopharmacology in Hammersmith, London, for my first session, and a researcher begins by asking me to recount every alcohol unit and drug I have consumed, pretty much ever. It’s a monumentally sobering task and makes me never want to get on it ever again. I don’t have much time to reflect though because a cannula needs to be fitted in my arm to allow the blood samples to be taken. At this point, I find that the veins in my arm “wobble around” a lot, which makes them difficult to locate. After a couple of failed attempts and some light bruising, the researcher finally finds a beefy vein in my hand and we’re good to go.

Next, it’s onto the good stuff: It’s time to smoke some weed. And by “smoke,” I mean, breath in marijuana vapor from a balloon inside a large plastic bag. It feels like trying to drink a beer discreetly in public and use an airplane barf bag at the same time. Getting high is known as a very chill activity, but being instructed to inhale into a bag, and within a strict nine minute window, is actually not very chill at all. To make things easier, the researchers play relaxing spa music and someone gives me a nice lemon and honey drink to help with the throat pains. My blood is then taken for the second time.

By this point, I’m feeling pretty stoned. As every Juul user knows, vaping isn’t that different from smoking in the impact it can have on your body, but it just feels healthier somehow. It’s the same now, except the wholesomely high feeling is heightened by the fact that I’m in a medical facility with actual scientists, as opposed to getting stoned at home on the sofa.

Now that I’m sufficiently baked, it’s time for me to enter the MRI scanner. I’ve never been in one before and am slightly alarmed when the researcher warns that there is a chance my copper IUD contraceptive may heat up inside me. I put it down to stoned-me paranoia and soon enough though, I am lying on the bed, waiting to enter the machine. A breathing monitor is applied to my chest and my head is locked into place with some sort of helmet that stops me from moving around. I’m also wearing scrubs that turn out to be so comfy, I ask to take them home at the end of the trial.

After a few minutes in the scanner, and getting over the initial shock of being in a tightly enclosed space, I manage to relax into things. It feels like being in an immersive art installation or a full-body, Oculus Rift-style remake of that bit in A Clockwork Orange where they make the man watch a horrible correctional film—except without the ultra violence! It’s a weird experience. Getting stoned in a non-medical setting is usually a way to make mundane aspects of your life seem a bit more fun and interesting. Here, between the machines and the breathing monitors, it feels like an episode of The X Files.

While in the MRI scanner, the researchers needed me to complete a set of IQ games aimed at gauging attention, short-term memory, and reaction time. Which sound simple enough, but become monumentally more difficult when you’re lying stoned in a brain scanner for nearly an hour, trying not to fall asleep. If I was at home, I would’ve sacked it off and took a nap. My working memory is clearly struggling under the weight of all the weed I’d just inhaled.

But according to Borissova, this is all part of the experiment. “Previous research has found that cannabis affects brain activity in different ways,” she explains. “One interesting recent finding from our team is that a high-THC strain of cannabis seemed to disrupt the work of a part of the brain involved in determining what we pay attention to, whereas a strain of cannabis that had more CBD caused minimal disruption to this region—again, underlining the importance of continuing to study what effects different strains of cannabis might have.”

Just when I get used to the idea of living in the scanner forever, a voice in my headphones tells me that my time is up. I’m removed from the machine and have my blood taken again, then perform another task that involves pressing the spacebar on a keyboard as fast as I can using my little finger. I’ve been at the university hospital for nearly four hours now, but there is one more task to complete. Happily, it’s probably the easiest one of the day: I’m given a square of Dairy Milk chocolate and asked to rate the experience out of 10.

Borissova reassures me that the trial’s tasks and seemingly endless blood tests are all for a reason. “The different tasks that participants complete have been used in previous studies on the effects of cannabis,” she says. “They are designed to assess different aspects of psychological functioning—such as memory, mood, and also general experiences of being under the influence of a drug.”

As the session comes to an end, my mood is definitely still baked—and extremely tired. But I’m happy to have offered up my services up to science and hope that my stoned MRI brain scans contribute to our understanding of cannabis. I’ll roll one up to that.