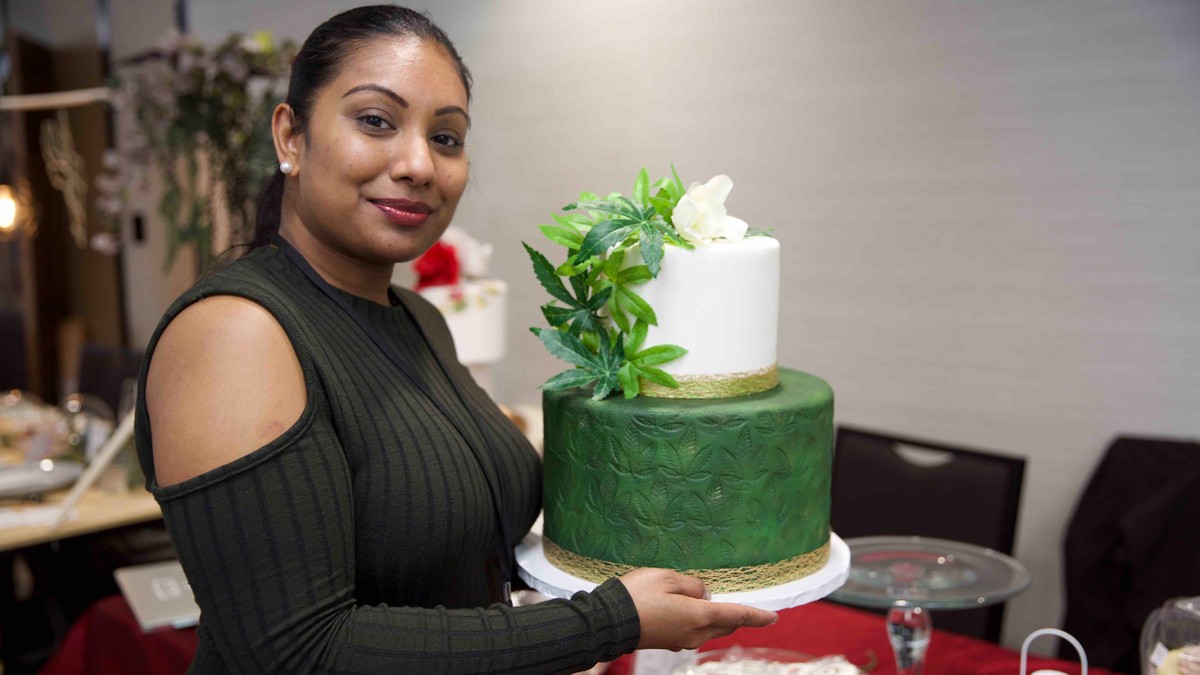 Elizabeth Buckle is heading inside a portable hot box—basically a van that’s been renovated to look like someone’s grandparents’ basement—and I’m following close behind.

Buckle is wearing a black t-shirt with “bride” written on the back. In front, it’s adorned with a silver pot leaf. She takes a seat on one of the black leather chairs in the back of the van, which is also decked out with a TV, fake fireplace, and photos of celebrities like Morgan Freeman and Rihanna blazing. After sitting down, Buckle, 30, sparks a joint. Her nails are long, turquoise, and sparkling.

It’s a scene that may play out at her wedding this fall, albeit in more formal attire.

Bride-to-be Elizabeth Buckle smokes up in a portable hot box.

“It’s still such a part of who we are as a couple,” Buckle, who has consumed cannabis since she was 15, tells me. “When we first met the first thing we did was smoke to get comfortable and get to know each other, ‘cause it was a blind date… If it weren’t for cannabis we probably wouldn’t have spoken.”

Buckle and I are at the Canadian Cannabis Wedding Expo—billed as Canada’s first wedding expo of its kind—held in Calgary last week. The van we’re inside is run by weed tourism company TEN7TEEN Cannabis. It’s parked behind the hotel, which is cool with all of this.

Tasty Buds are non-medicated chocolates that look like nugs of weed.

I have to admit my first reaction upon hearing about it was: Why? I didn’t fully understand how one could have a cannabis-themed wedding, aside from consuming cannabis, or having edibles for dessert (though that’s not legal yet.) But more so, I didn’t fully grasp why that would be important to a couple.

So I headed to Calgary in search of some answers.

The expo is being held in Hotel Clique, a boutique hotel near the airport. There’s a Pinterest-perfect Prosecco cart set up to greet guests in the lobby that really doesn’t scream “weed,” save for a letter board that says “sip & smoke.” Once upstairs, I spot women in wedding gowns—models who will be partaking in a fashion show later in the day.

Flower vase that doubles as a bong, and another example of a weed wedding cake.

Vendors are set up in a conference room with booths showing off their wares, each featuring a canna twist. There’s a green and white cake topped with fabric cannabis leaves, pastel colored bath bombs and other cannabis-infused skin care products for bridesmaids, flower vases that double as bongs, high-end blunts wrapped in 24-karat-gold, personalized crystal pipes, and a massage therapist offering CBD massages to bridal parties. One company, Tasty Buds, sells non-medicated chocolates that look like nugs of weed—ideal for wedding guests who don’t want to get high (like children).

Corey Cameron and Laureen Cauryn Cameron are organizing the event.

Expo organizer Laureen Cauryn Cameron of Mary J Brides says the concept came to her “like a bolt of lightning.”

“It’s funny because so many of my couples that I’ve already planned weddings for before legalization, they sneak out and go have a toke wherever, and they’re passing around a joint in between ceremony and reception,” she tells me. “It’s already there, it already exists. Now stylizing it and making it OK, and making it something that’s celebrated as well is awesome.”

Cameron says she’s already had interest from couples who want cannabis to be a part of their big day. She rattles off several ways to do that—toking after the first kiss, chopping up fresh cannabis leaves and bud in floral arrangements, giving away weed-themed wedding favors, and, of course, edibles when they’re legal. The concept is novel, but she says “the ideas keep coming.”

A model walks in the bridal fashion show.

Buckle, the first bride-to-be I spoke to, says she hopes to feature cannabis in her centerpieces, and have it available for her guests to smoke comfortably. She also wants a rolling bar—think cigar rolling, but weed, if it’s reasonably priced. As for why she’d want to incorporate weed into her nuptials, Buckle says the question should be: Why not?

“It’s such a part of everyday life, it’s normal now. It’s no different than serving alcohol in the long run and probably a lot safer. Nobody’s ripping their suits off after a couple of doobies.”

The idea of cannabis replacing alcohol at the reception comes up several times.

Groom-to-be Mitchell Heatherington, 27, tells me alcohol and prescription pills damaged his liver when he was just 19.

“I recovered with marijuana.”

Mitchell Heatherington and Sarah Cummer are getting married in August.

He and his fiancé Sarah Cummer want to include a bud bar at their August wedding in Duchess, Alberta, along with bud boutonnieres, and donut edibles.

Heatherington says the wedding will still have booze for his family but “we want to limit the alcohol as much as possible.”

Melissa Blackmore and Robert Langlois who are getting married next summer are taking a more militant stance.

Melissa Blackmore and Robert Langlois plan to have a dry wedding.

“We want to have a dry wedding,” Blackmore tells me. “Alcohol is not a part of our relationship. We’ve had problems in the past and we’re sober and we’re potheads. We’re having a cannabis wedding ‘cause that’s what we do.”

Blackmore, 37, says she smokes weed daily, while Langlois works as a manufacturing technician for licensed producer Aurora at the company’s 55,000 square-foot grow in Cremona, Alberta.

They’re at the expo for inspiration on how to give their wedding a cannabis flair; possibilities include a smoke station, and an infused wedding cake.

“I just think that cannabis has been a blessing to our life in many ways and I’m glad we get to finally come out and celebrate it more openly,” Blackmore says.

Many of the dozens of attendees echo similar sentiments about wanting to celebrate cannabis in order to destigmatize it. That includes Andrew Freedman and his fiancé Sarah Crossley, who are planning a destination ceremony in Jamaica.

Andrew Freedman and Sarah Crossley are having a cannabis wedding in Jamaica.

“I’ve always wanted to be a Rastafarian,” says Freedman, 25, a sommelier who currently educates the public on pairing wine with cannabis.

“I use the vernacular and vocabulary of wine and translate it to cannabis. That’s my way to normalize cannabis consumption and break stigma.”

Freedman and Crossley, 32, a full-time nanny, want their moms to pack a bowl of cannabis in a steam chalice for them to smoke as part of their unity ceremony. They also plan to take their guests to tour some of Jamaica’s ganja farms.

Model Lindsey Reynolds adjusts her makeup before the fashion show.

Point being, there’s no need for brides and grooms or guests to have to sneak off into the night to consume weed now that it’s legal. So it does make sense for people who consume and love it to want to make sure people are able to enjoy it at their weddings.

Also there actually are a lot more ways to incorporate weed into a wedding than I initially expected. It might even be more diverse than alcohol, since you can’t really use the latter to decorate a centerpiece or pin it to a suit. (If you pinned it to a suit like a boutonniere people would think you had a problem.)

But I do wonder if greening out is a concern, especially if people are mixing booze and weed, or consuming edibles.

As a weed wedding planner, Cauryn Cameron says she packs a “different type of energy kit” that includes things like pepper to help people sober up.

She says her staff is also trained to help people who may green out. But she points out “there are incidents with alcohol without cannabis being at a wedding.”

As someone who has literally witnessed a man drunkenly rip his pants off at a wedding, I would have to agree.