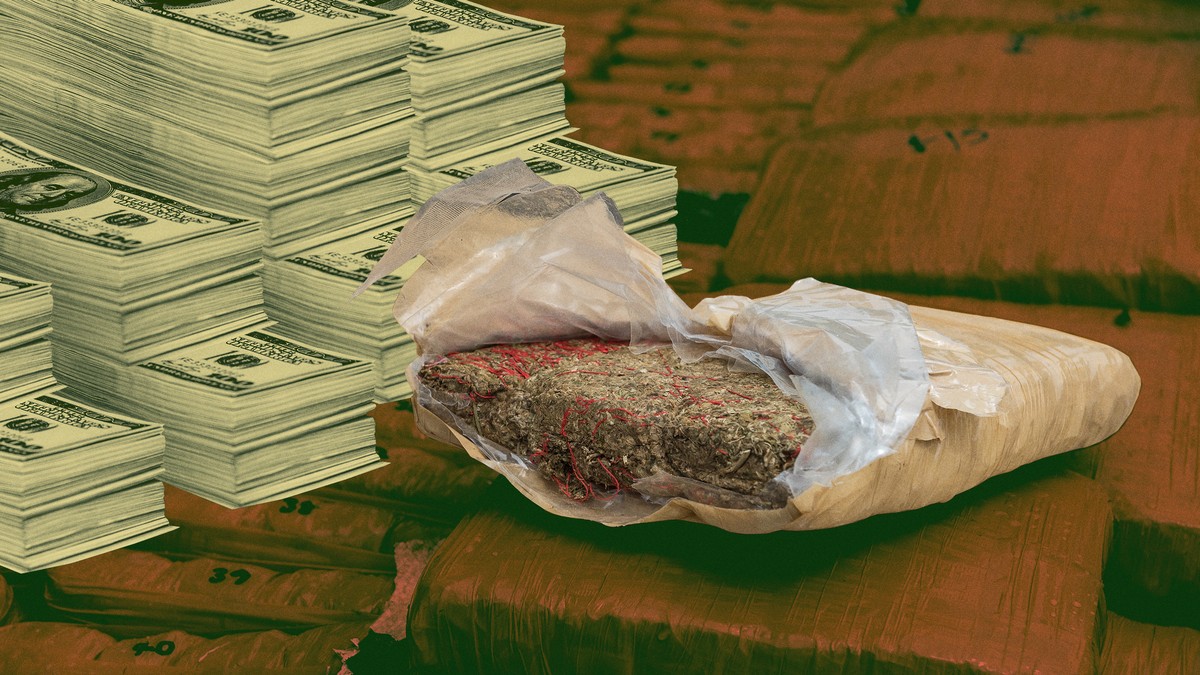 When a man I’ll call Mark made the move from Michigan to Oregon nearly two years ago, he had every intention of joining the legal cannabis market. Like many old hands in the industry, he’d started growing weed to help sick friends and family members, and planned to continue this pursuit by securing a medical marijuana cultivation license to operate an indoor grow and sell to local dispensaries.

This would be a dramatic change of pace for the US Army veteran who had spent the better part of a decade prior growing weed illegally—and even served time for it. But within a few months of his settling in the Pacific Northwest, Oregon’s laws changed, requiring medical dispensaries to either pay a fee or transition to a recreational model. Most shops went the way of “adult use,” said Mark, and before he harvested his first grow, he had very few options of where to sell it. Then came a few regulatory restrictions that didn’t bounce in his favor.

“Every angle I had to make a move, they cut it off,” he said. “Legalization has turned this industry pretty ugly for me.”

Now, after struggling to join the legal market, Mark has abandoned the effort. He sold off the bulk of his plants (dropping from 120 to just six), and is distributing his weed via word of mouth. He no longer deals in pounds, but single servings.

“I’m trying to stay as legal as I possibly can,” said Mark. “There’s nothing but gray areas in the cannabis industry.” Which is why Mark plans to leave the industry entirely by moving to a fertile Midwestern state and starting a hemp farm—weed’s less legally risky sibling.

As legalization has come to the US state by state (with a patchwork of local regulations) it has driven some growers like Mark out of the industry completely. Others, struggling with basement retail prices and an oversaturation of the market, have returned to the shadows. So as prohibition slips further into the rearview mirror of pioneering legalization states such as Washington, Colorado, and Oregon, the shape and scope of their illegal markets have begun to change. While experts say legal weed has taken a big bite out of states’ internal illegal markets, legalization has in many ways contributed to a surge in interstate cannabis trafficking.

“[We] have become a source state, a theater of operation for sophisticated international drug trafficking and money laundering organizations from Cuba, China, Mexico, and elsewhere,” wrote Bob Troyer, the US attorney for the district of Colorado, in a September Denver Post op-ed arguing that the state’s “commercialization” of cannabis should be “paused.”

Troyer criticized the state’s “permissive regulatory structure” for allowing an onslaught of negative consequences, from public safety and environmental concerns to creating a “booming black market.” In 2017, the state’s regulated industry produced 6.4 metric tons of “unaccounted-for marijuana,” he wrote, and more than 80,000 “black market plants” had been recovered on federal land in the state.

Troyer has worked for the US attorney’s office for 14 years, and in an interview said that the number and scale of reported cannabis plant and product seizures—by highway patrol, postal inspectors, local law enforcement, and others—have increased dramatically post-legalization.

“All of those things have exploded to a degree that’s hard to quantify,” he said. “And none of those things existed remotely at this scale before Amendment 64,” referring to the ballot measure that legalized adult-use marijuana.

Colorado isn’t alone in this struggle. In August, federal prosecutors in Oregon charged six people for trafficking weed as part of a “vast” operation in which weed grown within the state was then sent to Texas, Virginia, and Florida. A surge in large-scale weed seizures in Midwestern states also indicates an uptick in cross-country trafficking, authorities say, in which transporters are either passing through or area residents are traveling to legalized states and bringing product back home to sell.

“There are two dimensions of the illicit market: One is consumption in state of illicitly grown product; the other is export to states that are not legal,” said Mark Kleiman, a professor of public policy at NYU’s Marron Institute of Urban Management.

In most states with legal weed, the in-state illegal market has been slowly diminishing. In Colorado, robust public education campaigns, funding for law enforcement, and competitive cannabis retail prices have contributed to the success of the regulated industry, said Kristi Kelly, executive director of the Marijuana Industry Group. While a quick search of Craigslist—where many unlicensed delivery services advertise—shows there are still plenty of people trying to operate illicitly, the bulk of cannabis consumers in Colorado are now opting to buy their products through legal channels.

“Simply put, the growth of the legal markets are occurring at the expense of the illegal market,” Kelly said.

While the Denver Police Department declined a request for an interview, Lieutenant Andrew Howard said in a video press release in September that following legalization, cops saw a huge increase in citizen complaints regarding illegal grows—a queue of 40 to 60 each day. In addition, because residents are legally allowed to have up to 12 plants inside their home, investigating these allegations can be time-consuming for law enforcement, said Howard.

“Just odor doesn’t give us probable cause for a search warrant, so it takes the detectives a long time to establish if something illegal is going on inside that residence,” he said.

Ultimately, the bulk of these complaints do in fact lead to the discovery of illegal grows, said Howard. In addition to in-state residents, many illegal growers have moved to Colorado for this very purpose, and are growing weed to then ship—via the postal service or couriers—to states like New York, where producers can “triple or quadruple” their profits, said Howard.

“[Post legalization] we have seen an increase in the black market because the marijuana… is being shipped out of state,” he said.

There are a lot of possible reasons behind the increase in interstate trafficking, according to experts.

For one, the abundance of licenses issued by the states have made it easier for illegal operations to hide in plain sight, said Kleiman, and while operators are required to work within a track-and-trace program intended to keep tabs on every plant grown, some have learned how to cheat the system. Then there’s the sheer volume of cannabis being grown in many of these states, which has resulted in an oversupply ripe for the illegal market. For example in Oregon, cultivators are capable of growing about 2 million pounds of weed per year but consumption demands top out around about 372,000 pounds annually, according to a report released in August by a coalition of government agencies. (It should be noted that this report has proven controversial and much of its data criticized by local authorities and industry folk.)

In Washington as well as Colorado, it appears that illegal growing has actually increased post-legalization, said Kleiman. When all growing was illegal, it was easier to attract attention from law enforcement; now that it’s legal and licenses are abundant, these unpermitted operations are harder to spot.

“An illegal grow looks a lot like a legal grow,” Kleiman said.

But halting trafficking isn’t just a matter of sniffing out and shutting down illegal operations. Legally grown or sold product can take a left turn a number of ways. For one, if retail prices are low enough, everyday consumers can buy cannabis and then resell it illicitly, said Steven Davenport, assistant policy researcher at the RAND Corporation and a PhD student in policy analysis at the Pardee RAND Graduate School. Earlier this year, the Oregon Liquor Control Commission, which oversees cannabis sales in the state, reduced medical marijuana purchase limits from 24 ounces per day to one ounce in an attempt to stem illegal distribution by individuals making large purchases.

Weed growers can also divert directly from their own supply, said Davenport, by working the track-and-trace system by either not properly entering data, faking a burglary, or claiming loss on a large batch of bad crops. While there are many markers to judge the success of legalization—raising tax revenues and keeping pot out of the hands of kids, among others—lingering illegal activity shouldn’t be viewed as a “giant failure,” said Davenport.

While there’s not much data on how existing illegal operators changed or adapted their business models under legalization, Davenport points to a possible scenario as outlined in a RAND study. According to the 2010 report that explored the potential impact of cannabis legalization in California on drug trafficking revenue and violence in Mexico, legalization in California would only “significantly influence” these trafficking operations is if weed produced in California was smuggled to others states at competitive prices. If this was the case, California green could undercut Mexican sales by more than 65 percent, according to the study.

Davenport further theorizes that some organized gangs involved in illegal cannabis trafficking may simply shift their focus to other “illicit income-generating activities” under legalization. Professional drug-trafficking organizations are able to “strategically diversify” revenue streams, so while they may be weakened by legalization, it won’t put them out of business, he said.
However, for small-scale operators, like the quintessential high school or college student selling weed on the side to make some extra cash, legalization may be the change that compels them to leave the illegal market entirely.

Most drug market experts would say not to expect complete eradication of an illegal market even with legalization, said Davenport, and for cannabis, interstate trafficking will only significantly decrease as marijuana is increasingly legalized.

“It’s hard to imaging a thriving black market under federal legalization,” he said.