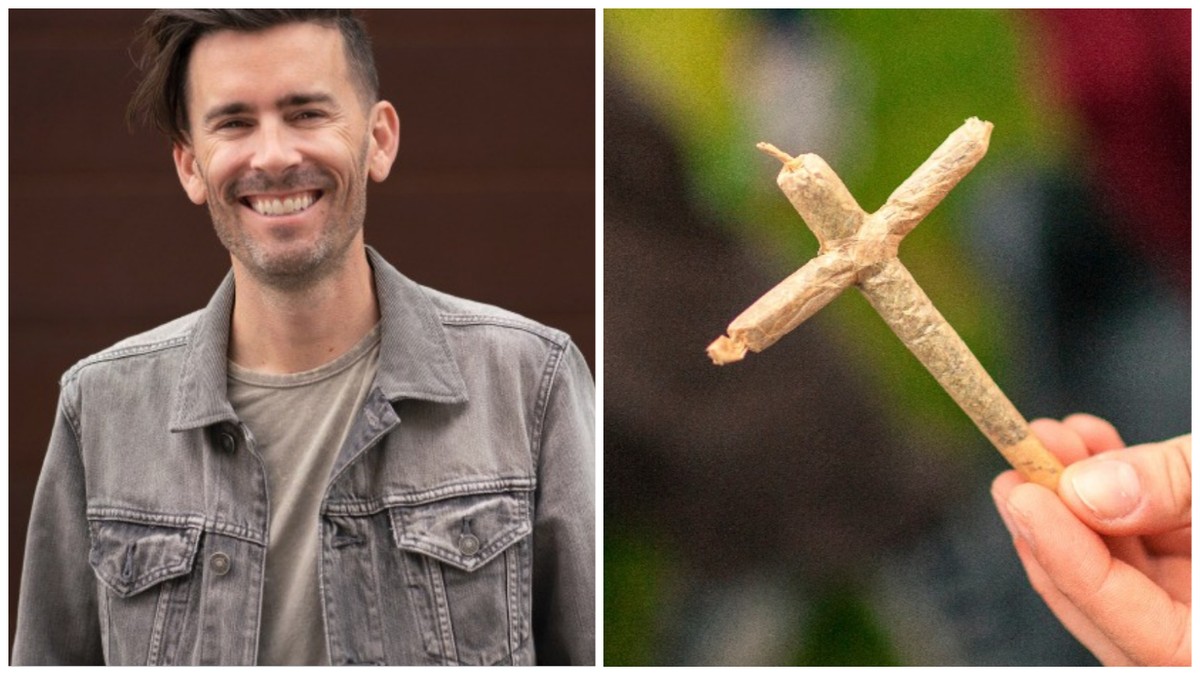 On Saturday, 4/20, a day before Easter, a 43-year-old nondenominational Christian pastor named Craig Gross went into the desert for Coachella and shot a video about how much he loves weed. Gross, raised a Baptist in Northern California, has the look of a Christian utterly at home in the country’s most image-conscious music festival: plain T-shirt, one shaved side of his head, long hair on the top of his scalp parted precisely with gel. He resembles an emo kid grown polite with age.

Gross’s new venture, announced in that YouTube video, is unusual even by the standards of the crowded cannabis industry: Christian Cannabis, a website that sells religiously themed vape pens and CBD balm and which caters to devout Christians who love weed as much as he does.

“I wanted to start a new conversation today,” Gross says in the video, staring into the camera between shots of propeller planes ascending into the sky and Coachella’s Instagram-famous Ferris wheel. “And it’s a larger conversation than just recreational or medicinal, legal or illegal, THC or CBD. But a conversation about the emotional, physical, and—dare I say—spiritual effects that I’ve had with this controversial plant.”

At the moment, Gross said, Christian leaders don’t know how to talk about the plant, since many of them have absolutely no actual experience with it. (Gross himself, he said, didn’t try any drugs until he was 37.) As cannabis gains cultural and political acceptance and young evangelicals move further to the left than their parents, it seems likely that Christians, along with everyone else, will be casually vaping THC and CBD and snacking on the occasional pot chocolate. And if Christians are smoking weed, why can’t weed be Christian?

“I imagine more and more Christian communities will be grappling with how people will integrate their cannabis use with their Christian beliefs,” Gary Laderman, a professor at Emory University who studies the intersections between religion and drugs, told VICE.

Christian Cannabis has already gained some traction on social media. Steve Meyers, a pastor based in Los Angeles, lauded Gross in an Instagram comment, writing, “The Church is FINALLY talking about mental health, acknowledging its validity, the importance of seeking medical treatment… Craig is not a drug dealer, he’s not evil, he’s just been on a journey and wants to start an honest conversation.” Meanwhile, in a sermon posted on Facebook on Sunday, the preacher Charlie McMahon of the SouthBrook Christian Church in Ohio—which, like many churches, helps people recover from drug addiction—came out against it.

“We have a ministry partner who has taken up the business of selling pot,” he said to the audience. “He is going to be soon a former ministry partner of ours. Because he believes, hey, if you take medication, why shouldn’t you be able to take this medication? And in a church based in recovery, that ain’t going to work.”

Gross is ready for both this celebration and blowback.

“I mean, let’s be honest,” Gross said over the phone earlier this week. “Christian Cannabis, there’s no such thing. I hate the name. It’s stupid. But inside the Christian world—and it’s the thing I hate about it—you have to have your own products.”

Although those products are not yet available for purchase, don’t appear to be much different from your standard secular weed commodities, other than the language used to sell them. One “sativa-dominant” vape pen, called “Praise,” promises to “help shed light in shadowed places.” Another, called “Purpose,” asks whether it’s “possible that, while claiming to champion sobriety, we are often inebriated by the clutter inside of our minds?” And then there’s People, “cannabis-infused ‘microdose’ mints,” said to be the “perfect aide to help you turn your eyes outward, so that you may love your neighbor as well as you do, yourself.”

“I wish I had options like these when I first walked into the weed shop in California,” Gross said.

For years, he had chronic migraines, he said, sometimes getting hospitalized and ending up with large medical bills. After he watched Sanjay Gupta’s CNN Weed documentary, he was intrigued, and quickly obtained a medical card in Southern California, where he was living. Cannabis soothed the pain that doctors had been unable to quell; plus, as he mentions on his site, he believes it also brought him closer to God. “Call me crazy,” he writes, “but that little green cross pointed my eyes toward the real Cross, and I finally saw it.”

Ordinary pot merchants don’t really speak his language, Gross said, and he was initially overwhelmed with the stoner verbiage. To that end, he’s spreading the gospel of cannabis, and encouraging evangelical Christians—those unfamiliar with, unsure of, or intimidated by the plant—to share their thoughts in an online forum.

“What is happening right now is what I wanted,” Gross said. “When I have a pastor friend of mine who’s off depression medicine, saying, ‘Hey, I’m hiding the marijuana, and maybe one day, Craig, I won’t have to hide it, and I won’t be fired from my job.’”

Carl Raschke, a professor of religious studies at the University of Denver, doesn’t buy what he called a “gimmick.” “As far as I can tell, Gross is a kind of showman who (like many others of his ilk) tries to create a sensation around himself by positioning oneself as one who is courageously transgressing Christian ‘norms’ regarding pot,” he said in an email. “[It’s] not much different from a bunch of so-called ‘theo-bros’ from evangelical backgrounds who get together to drink beer over Bible study and pride themselves in being ‘edgy’ or even ‘naughty.’ But the general view from the outside is ‘so what?’”

Gross wants to educate Christians about weed in a similar way. Reverend Al Sharp, a progressive Protestant pastor and the executive director of Clergy for a New Drug Policy, who advocates for the end of the war on drugs, said that he would call the Christians opposed to smoking marijuana almost exclusively “salvationists”: “Their main religion,” he said, “is one that says here are the rules you have to follow, so when you leave this world, you’ll be saved in the next world.”

The adherence to rules and condemnation of mind-altering substances goes beyond just being anti-pot. The temperance movement in the 1920s and 1930s, which brought about Prohibition, was led by women and Christians concerned alcohol was affecting citizens’ physical and mental health. Those same attitudes now influence Christians’ opposed to cannabis. As the pastor John Piper blogged in 2014: “For most users, [marijuana] is a recreational escape, which produces diminished accuracy of observation, memory, and reasoning. And it may have lasting negative effects on the mind’s ability to do what God created it to do.”

Gross has anticipated this kind of argument, and has positioned himself on the opposite side: Cannabis has helped his mind; it hasn’t destroyed it.