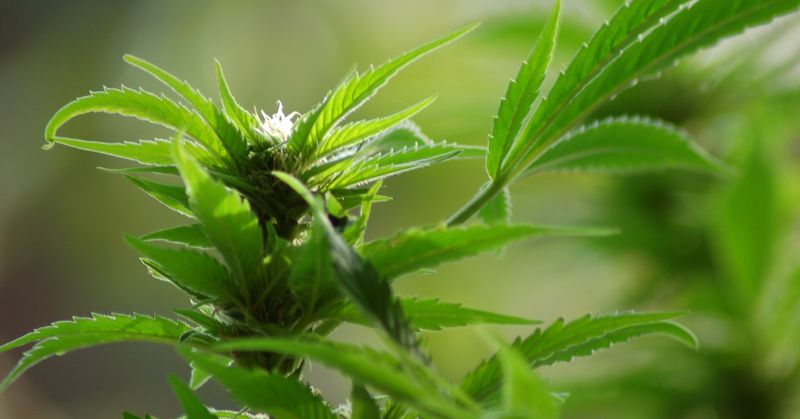 Now that cannabis is big business, entrepreneurs are eager to bring tech to the weed industry, which means that cannabis is on the blockchain and machine learning has come for marijuana cultivation.

Both technologies were on display at this year’s Marijuana Business Daily Conference, or MJBizCon, in Las Vegas. Six years ago, MJBizCon started with 17 exhibitors and 400 attendees in Denver. Since then, more states have legalized marijuana, which means more demand for cannabis and more opportunities to make money. For example, analysts expect that the cannabis market in Michigan, which recently became the first Midwestern state to approve recreational marijuana, will reach nearly $2 billion annually in a few years. Globally, the cannabis market is expected to expand from $13 billion this year to $32 billion in five years, experts say. That growth is why this year’s MJBizCon has over 1,000 companies exhibiting and 25,000 attendants from 63 countries.

But where there’s money, there’s hype. “Cannabis on the blockchain” sounds like word salad, and the reality is similarly ludicrous. CannVerify sells shiny, holographic labels that have their own serial numbers. When you scan the label, that serial number is entered into a blockchain database, says co-founder Vicken Jarbourian. The idea is that breeders will use that label, and consumers will check the label using the CannVerify app. If the two match, the marijuana is guaranteed to not be counterfeit.

While counterfeit marijuana is sure to be a problem, blockchain is most likely not the solution. Though there is no universal definition of blockchain, at its most basic, it’s a database that isn’t controlled by any one person. A blockchain database might make sense when working with things in the digital realm, but not with real-world items. It would be easy enough to take a label off of one package and simply put it on something else. “Blockchain” won’t know any better.

Claims of “machine learning” and “automation” are also increasingly common in the marijuana business, especially when it comes to growing and processing the plant. Massachusetts-based Bloom Automation exhibited a robot at MJBizCon that automates the cannabis trimming process. (After harvesting, marijuana needs to be trimmed, which is a job usually done by humans, often migrant workers, because the flowers are so fragile.)

The robot, still in beta, uses computer vision and a machine learning algorithm to tell the valuable flower and the leaves apart and trim them, a spokesperson told me. The company had employees hand-color over 6,000 images of marijuana — leaves one color, the flowers another — so they could feed the photos to teach the algorithm which one is which. Eventually, the robot will be able to trim three times faster than someone doing the job by hand. At least, that’s the hope.

Other companies in the cannabis cultivation space include Capna Systems, which has developed an enormous machine to automate the extraction part of marijuana cultivation. Toronto-based Braingridsells a greenhouse sensor that picks up and analyzes climate data and gives suggestions to improve the harvest.

When it comes to consumer products, marijuana entrepreneurs are focusing on health. InDose is launching a pilot program of its disposable vape pen. The pen is built with sensors that detect and tell you how many milligrams of THC you’re getting with each inhale. It’s an interesting and potentially very useful idea, as plenty of people are interested in controlling those dosages. Still, with “patent-pending” technology and “proprietary” algorithms, the exact science still seems unclear.

Resolve Digital Health is attempting to deploy even smarter tech, selling a “smart inhaler” that tracks the medicinal effects of cannabis. Put in a smart pod, inhale. Before and after, users are asked to rate their pain, and this information is constantly fed into the Resolve app, CFO Mukesh Kshatriya says. Kshatriya adds that the inhaler can even analyze factors such as altitude, pollen, and barometric pressure from location-based information. That could be useful, but it might also be iffy, given the uneven legality of marijuana across the nation. The smart inhaler is a more quantified approach to anecdotes about cannabis helping health problems, and Resolve hopes that one day, the algorithm will be able to make predictions, like telling a customer that they’re likely to have a migraine in the next couple of hours.

It’s still early for marijuana tech. With the drug still illegal at the federal level and stigmatized even where it is legal, many investors will be staying away. The rest are just starting out. Resolve Health, for example, has raised about $5 million, but it’s only launching now with preorders. Still, there have been growing cracks in the regulatory dam that keeps marijuana illegal, and once that dam cracks, the influx of money and hype will be massive. Soon enough, there will be interest from Big Tech, Big Agriculture, Big Tobacco, big everything, according to Chris Walsh, a founding editor of MJBizDaily. Amazon and Google and Philip Morris are poised once they realize they can get involved without hurting their mainstream business, he added. It won’t be long now.