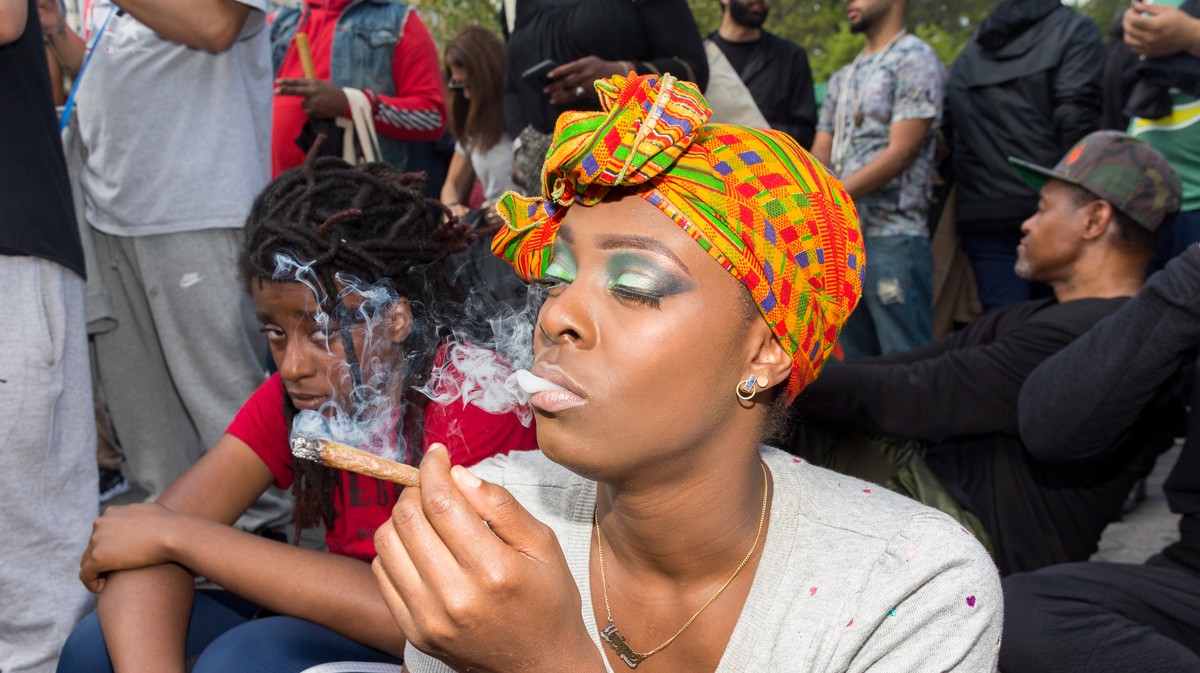 A majority of New York voters support the legalization of weed, according to recent polls. They also want to see minor drug convictions erased. As many in the state look forward to the expected legal benefits and massive tax revenue, places like Nassau County have already voted to opt out of legal recreational cannabis sales, with Suffolk County expected to adopt a similar measure. And while the gears slowly turn in Albany and Governor Cuomo hopes to solidify his legacy with weed, the people of NYC have yet again taken their spliffs to the street to show their support.

The NYC Cannabis Parade began as a “smoke-in” in Washington Square Park in 1973. It’s evolved to become much bigger, and it’s important as the country moves closer to widespread legalization. The 2019 outing had a rainy start and a sparse presence, but the subsequent rally was a packed gathering of elected officials, industry experts, and activists with their handmade signs, shirts, buttons, and blunts. I spent the day with this wonderfully stoned crowd, discussing their thoughts, motivations, and concerns.

“I’m part of a startup that makes self-sustained grow units so people can grow their own cannabis at home. We’re here to educate ourselves and to the contribute to the activism within the cannabis community.”

“It’s about human rights really. We’re trying to have a clean natural way to live and to medicate ourselves.”

“I’m known as the mad yippie pie thrower for having thrown pies at fascist politicians. I’ve been involved with organizing smoke-ins since the 60s. I don’t want the state making money off of the plant. It should be legal to grow, to have, and to distribute. It should supersede other chemicals that I’ve used courtesy of ‘ Pig’ Pharma.”

“Past all the very good reasons, there’s a culture of good people who just like to have fun with cannabis. Legalization has worked everywhere it’s been tried, so I don’t see why it wouldn’t work here in NYC.”

“We do events that bring people together in a safe environment and heal the body through food and cannabis.”

“Beyond prohibition and taboos and all, cannabis is a drug that’s constructive for society. It’s certainly far better than tobacco or alcohol.”

“At the heart of cannabis reform, we’re talking about the criminalization of people and the different ways that the law utilized this substance to ruin lives. The existing laws predominantly punish the poor, people of color, and women. I’m most concerned with and excited by how racial and economic justice principles will be applied to the legalization of this plant.”

“I think a joint should be as easy to get as cigarettes, and no one should get tickets or be
arrested for it. Complete legalization is why I’m here.”

“Marijuana is medicinal and helps with all sorts of health issues. And it’s helping so many other economies, why not New York?”

“We held the very first smoke-in, open cannabis consumption protest, in June of ’67 at the first Grateful Dead concert in Tompkins Square Park. Right now, 40 percent of the country still believes in locking us up, so the most important point is to address the people who are against legal cannabis, argue with them, and change their minds.”

“Among other drugs, cannabis appears to pose the greatest threat: Freedom. To me It is truly inspiring to see the perseverance and heroism displayed by women in this industry. Women owned businesses pave the way for dialogue, respect, education, and equality.”

“Full legalization is going to take a state-wide, multi-generational, mass grassroots movement which we need to build. This is a plant that has incredible healing powers. It’s the healing of the nations and we’ve been criminalizing it, and the people who use it, for far too long.”

“Cannabis allows people to relax, take a step back, and be stress-free. It’s beautiful.”

“I personally am not a consumer, but for me it’s always been obvious that we should switch to legalization. Why? Because of money. Money for entrepreneurs, money for government programs, for medicine, for all the patients out there, and the plethora of ailments, both chronic and acute. And lastly, but most importantly, restorative justice and social equity.”

“I use different strains of marijuana for different purposes. It’s an integral part of my life but It doesn’t control me. It’s therapeutic.”

“I’ve been coming to this parade for 10 years and I’ve been one its organizers for the last 8 years. Social media has allowed volunteer groups and other organizations to be heard by a mass audience and gives us the ability to fight against those anti-cannabis groups with big money behind them.”

“It’s part of our DNA, our makeup. It’s a part of human culture. Herb to me is a plant and all plants are healers.”

Elena: “A lot of my friends smoked it in high school and I was terrified. Over the summer one of them gave me an edible and the rest was history. But I think it should be regulated like tobacco and alcohol, with an age limit.”

Micky: “Legalizing it and therefore changing the classification of the drug will allow for more research to be done on the long-term effects of cannabis, so I consider it a good thing.”

“Cannabis is a holy sacrament! It’s a burning bush! Moses smoked it on the mountain! What happened to freedom of religion? We smoke the burning bush and we see god in everyone and everything.”

Visit Daniel Shapiro’s instagram for more of his photo work.