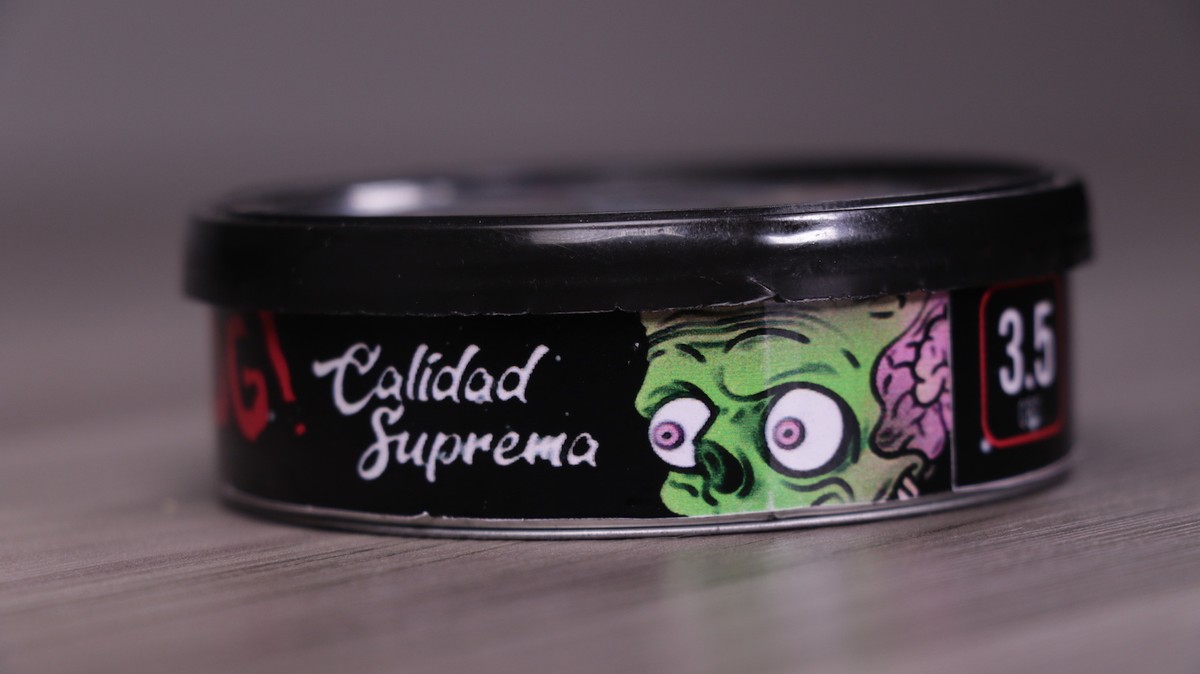 CARTEL CHRONICLES is an ongoing series of dispatches from the front lines of the drug war in Latin America.

It is the shape and size of a can of tuna, but it’s obvious right away that it doesn’t contain fish.

The label of the tin is black-and-white, and its side is marked Calidad Suprema (Supreme Quality). A pink and green cartoon head with big boggling eyes can’t quite believe his luck. Pull open the can, and inside are three perfectly-shaped marijuana buds, produced in the thriving legal industry in the United States and shipped down for sale on the streets of Mexico City’s richest neighborhoods.

The legalization and artful cultivation of quality weed in the United States has started a small but interesting trend. Mexico’s cartels and enterprising individuals are purchasing the finest version of the herb from legal labs and dispensaries in California, Colorado, and other states, and bringing it south of the border for consumption by discerning Mexican consumers.

As President Donald Trump insists on fortifying the shared border between the two countries, he may not be aware that drugs aren’t just moving north from Mexico into America. American weed is now headed south too.

Mentions of the sale of American weed products, especially close to the border, have circulated for the last few years. More recent reports suggest that the new tinned US weed, although expensive, is in high demand and sells out fast, at 1,500 pesos (around $75) for half an ounce. That’s more than six or seven times the price of the cheaper, regular weed on the market, which costs around 500 pesos ($25) an ounce, according to one marijuana menu seen by VICE. It’s also a lot cheaper than in the US, likely due to traffickers buying in bulk and trying to attract new customers south of the border.

Rusty Payne, a spokesman for the DEA of the United States, acknowledged that American weed is moving south by both land and sea—”Every which way, is what we’ve seen”—but not in a way that warrants significant attention.

Recreational cannabis is now legal in ten US states, while 33 states have legalized cannabis for medical use. Domestic production in the US continues to grow both in volume and sophistication, according to the DEA. Criminal groups like the Sinaloa Cartel and the increasingly powerful Cartel Jalisco Nueva Generacion (New Generation Jalisco Cartel) have been quick to bring the new marijuana forms into their drug portfolio, and just like many of the finest elements of American culture, Mexicans have gotten a taste for it.

“I don’t blame the people of Mexico for wanting to smoke cannabis imported from legal states within the US. The product is grown under heavy regulations that don’t permit many pesticides, and also lab-tested to ensure no mold or other contamination. They’re consuming a safer, more effective product because it was produced under a legal landscape,” said Danny Danko, senior cultivation editor at TheHigh Times magazine based in New York.

Still, the volume of weed moving south across the US border into Mexico is dwarfed by the amount of Mexican marijuana being smuggled into the United States. With 500,000kg of cannabis in 20,000 incidents seized last year by the DEA, Mexico remains the biggest foreign provider of illegal weed to Americans, according to the DEA’s latest National Drug Threat Assessment report

But Mexico has a reputation for low-quality marijuana, and seizures along the US-Mexico border have been falling for years. Between 2016 and last year there was a 34.7 percent drop in seizures by total weight.

“What is pretty clear at this point is that the good old days of sending truckloads of marijuana to the United States are long gone,” security analyst Jaime Lopez said. “The Americans have taken more of the market in the States over the last ten years, which has dried things up for the major [drug] organizations.”

Mexico’s cartels have been hit by legalization in the United States, and have turned to poppies (heroin), methamphetamine, and deadly synthetics like fentanyl to make up for their losses. But they haven’t given up on Mary Jane.

For the last few years, menus of increasingly sophisticated marijuana products have circulated via WhatsApp in Mexico City. Products are often delivered to your door, sometimes via Uber Eats. One could assume that a lot of the different types of weed on offer were American and lovingly grown in labs in states like Colorado. But local street dealer Jose (not his real name) told me during an interview in downtown Mexico City that he imports oil cartridges for e-cigarettes and vaporizers from the United States, but nothing else.

He has seen American weed grow in popularity with elite Mexican smokers, he says, but pointed to another interesting trend—that the growing taste for better weed south of the border has forced the cartels and their producers, hurting from the preference for American product over their own, to up their game.

He said his finest marijuana is coming from Sinaloa—the birthplace of the cartel once controlled by Joaquín “El Chapo” Guzmán—not California.

Many farmers in the Sinaloan mountains, which form part of the infamous Golden Triangle that produces much of Mexico’s poppy and marijuana exports, have switched from marijuana to poppy plantations in recent decades to feed America’s opioid addiction. But others have started to innovate and take their marijuana plantations into greenhouses, bringing in high-end seeds via the internet and learning new methods of cultivation online. Growing better marijuana isn’t that complicated.

“I have customers who go to California saying that they tried the dispensaries up there and they found that the flowers we provide down here are better quality than the stuff they are growing in the US,” Jose told me, contradicting the popular local wisdom that the cartels don’t have the know-how and infrastructure to compete with American producers.

“Why people find these canned products appealing is because of the branding and the marketing they have, and the colors and the pictures on the cans—people find that very interesting. At the end of the day, when I tried that stuff and smoked it, I didn’t see any difference between my top-end farmers and the can, which costs three times as much,” said Jose.

Price and quality will be fundamental to the high-end weed market in the coming years, and the taste for the finer weed in Mexico seems to be on the rise. Although right now the market is restricted to a small pool of Mexicans with enough money to afford it, that could change if local produce matches the quality of American marijuana at a fraction of the cost. And as Mexico itself moves closer to legalizing recreational marijuana, competition for a market still largely controlled by the cartels will be even more fierce as legal players from home, as well as abroad, enter the fray.

The winners on the supply side will be those who can offer the highest American quality and variety at a fraction of the price.