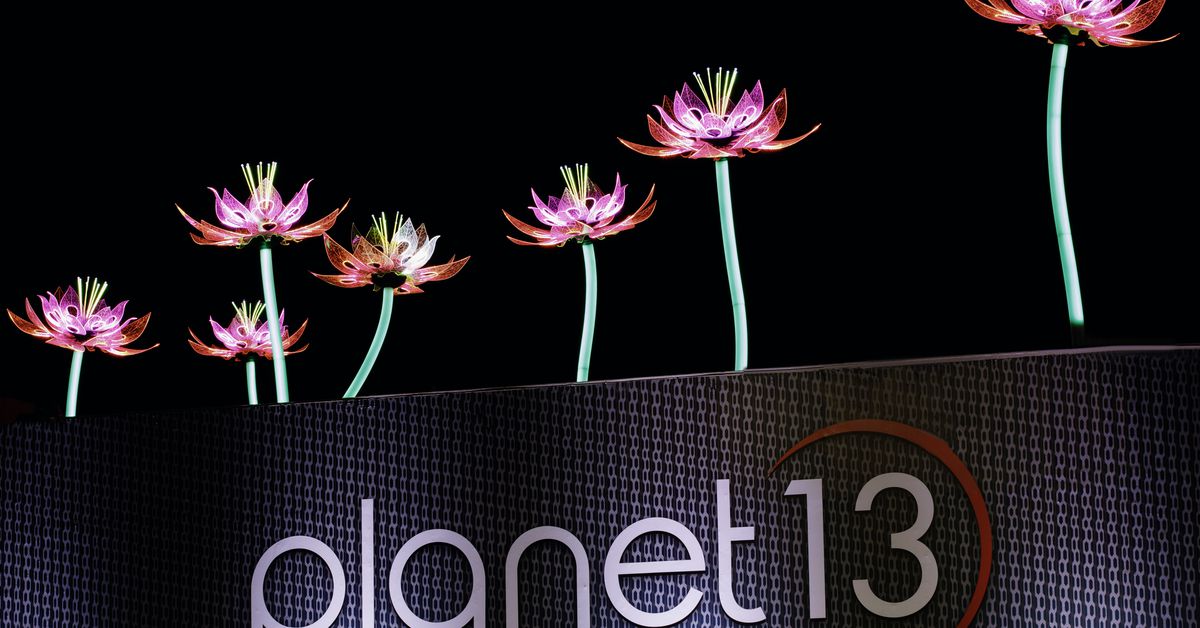 At the very end of my tour of the world’s largest cannabis dispensary, CEO Bob Groesbeck takes me outside to see the lotuses. Sticking out from the top of the building are seven large plastic flowers, each with a neon green or orange core. It’s the middle of the day, so they look a little out of place, but Groesbeck assures me that it’s quite impressive at night when the entire complex is lit up and the petals change color. In fact, he says, the artist hired for the installation had created something similar for Burning Man.

That’s when it all starts to make sense.

Until then, I’d been having trouble placing the aesthetic of Planet 13, the “cannabis superstore and entertainment complex” that just opened in Las Vegas. All black and glass, it does have some of the sleek, modernist hotel look Groesbeck is going for. The glass display cases give it a jewelry store vibe, like Kay Jewelers for a different kind of treasure. But nothing quite fits until Groesbeck tells me about the dispensary’s connection to this other Nevada institution. The two share a clear visual and spiritual kinship.

Planet 13, I realize, aspires to be the Burning Man of weed dispensaries. The Black Rock City desert festival emerged from radical counterculture values, yet it has become an increasingly expensive playground for tech moguls arriving on private jets. Both Planet 13 and Burning Man are shiny and neon, vaguely nature-y yet futuristic. Things glow. There are lasers. Both are about alternative values and wellness, but they’re also about being cool and serving as a club for the rich. If anything, they’re about turning alternative values and wellness into being cool — hopefully, in Planet 13’s case, to the tune of millions.

“Is that the strongest sativa you have?”

This 24-hour, $7.5 million “theme park for marijuana” is the latest expensive bet on marijuana’s makeover. More than any other drug, marijuana has been linked to politics, activism, and, for a long time, the “dirtbag” and “stoner” stereotypes. Yet, as legalization continues and public opinion toward marijuana becomes more favorable, its meaning is changing again. It has gone from a dangerous substance to be avoided entirely to something only those people do to a potential cash cow so long as you can convince the rich that they want it. From Beboe, the “Hermes of Marijuana,” to the $20 Défoncé Chocolatier bar to a $700 marijuana pendant, the high-end marijuana market is growing, and the drug is expanding into new demographics

Considering it doesn’t even live up to its own promises yet, Planet 13 has a long way to go. “Cannabis superstore and entertainment complex” conjures images of 3D IMAX theaters, a skating rink with a marijuana leaf carved into the ice, and a pot-themed planetarium. Maybe one day. Though the entire property, once a 60-year-old warehouse, comprises 120,000 feet, only about 16,000 — or the size of a couple of mall stores — is developed. The rest is empty space that will someday host a coffee shop and food hall. Still, even in this undeveloped state, the complex offers a glimpse into the flashy, luxury future of a much-stigmatized drug.

Outside, a giant red kugel fountain sprays mist. It, too, lights up at night. Inside, a reception desk is surrounded by men in black uniforms that I thought read “ICE,” but actually say “IGS.” (They’re security, and the dispensary is also monitored by 140 cameras that, if need be, can zoom in on the register and make out the year that’s engraved on a penny.) Prove you’re over 21 and walk on through. A world of screens awaits.

Screen one is an LED mural on the floor. Screen two is a television replaying an ad that’s encouraging you to interact with said mural using your feet. The mural can be programmed seven ways, but today, it’s displaying a bucolic pond: rocks, flowing water, and spotted red-and-black fish swimming among lotus pads. The panels respond to pressure, so electronic water ripples under each step. Make a move near the fish, and they flit to the side of the “pond.” On other days, the mural becomes a soccer field with a ball that customers can kick back and forth.

Past the floor mural, the left side of the hallway has a few Planet 13 clothing displays next to screens advertising that exact merchandise. On the right is the actual dispensary. Its walls are glass, so you can either look through them to see the screens inside the dispensary or look at the glass as it reflects the displays on the opposite wall. It’s a real fun-house vibe. The hallway is curved on purpose, Groesbeck tells me, to be more classy. But it’s the technology that makes it an experience they hope customers want.

And what an experience it is. Step inside, and you’ll be bathed with light. Each wall has (what else?) multiple flashing displays advertising flowers, vapes, or concentrates. One larger television promises an orb show every couple of hours. Overhead, another mural constantly changes form, morphing from flowers in space to a 3D face pressing into lines to a Pac-Man-like maze in bright colors. Directly underneath is a blocky mini-room that will soon be a scent bar where customers can sniff terpenes, the aromatic compounds secreted by the leaves of cannabis plants.

This is marijuana meets market research

Red-shirted employees mill around. Almost everyone is white. Glass cases show off dabbing rigs in swirled colors and gummies. I spot a black-and-gold, art deco-style “luxury disposable vape pen.” There are rows and rows of resins in amber and red, ready-roll joints styled with the font used in Old Western saloons. There are flowers, too: display after display of cannabis strains, each in their own glass box, some of the cases filled with fake flowers, others going for a more minimalist look.

A group of guys, probably just over 21, hangs over one of the displays, pointing at the Jane Snow strain and exclaiming that it’s “fire.” One of them, who has long hair and a gray North Face sweatshirt, keeps reading the labels, saying, “Oh my god.” His friend is hanging off of a girl in a black crop top; the two peer at the case exhibiting strains like Death Star x Cherry Pie and Love Triangle. Other names: Orange POTUS, Cheesecake, and Anslinger (after the famously anti-cannabis politician Harry Anslinger).

A blonde woman clutching a Topshop bag walks back and forth. Meanwhile, a frowning middle-aged woman in black glasses loudly asks, “Is that the strongest Sativa you have?” She buys it. An older man with white hair and a white dress shirt walks in and is immediately accosted by an employee asking if he knows what he’s looking for: is it dabs? Is it concentrate? Does he have a brand in mind?

The man, who looks like any office employee, says, “I just want to buy some pot.”

Earlier the same day, I was a mile away at a marijuana business trade show. Most of the booths showed off tech products that are designed to help cultivate and extract the plant, but there were a number of creative agencies and branding companies present as well.

One agency perched itself in front of a garish mural of swirling colors, block letters, and cartoon figures that seemed straight out of every stoner caricature. A few rows down, though, was a set of four attractive displays from Cultivarian Brands.

“Midnight Oil” had a close-up of a man’s greased hands holding a wrench under the glowing orb of the Moon. Elevium featured the back of a thin blond woman in a (probably 100 percent cashmere) sweater with her arm joyfully raised, a pine tree in the distance. It could have been an ad for a 10-day Vipassanā retreat. “Locals” had the earnest face of a bearded white man superimposed over a pine forest, while Jane’s Bakehouse — the “first full-size microwavable edible” — had clearly taken a design page from the Skinny Girl brand. It was all vibrant colors and healthy-looking women with big smiles, one of whom was even ethnically ambiguous. Quite tasteful.

“Everyone builds a product first and tries and wrap the brand around it,” Adam Callow of the Kindred Wolf creative agency told me. “We did it a different way. We did research to see what people are looking for and went from there.” Cultivarian Brands didn’t have a product, but it knew there was money to be made. It hired Kindred Wolf to do market research and package these brands and products to appeal to different groups.

For instance, 54 percent of “Locals” men prefer to buy local brands; 95 percent of “Midnight Oil” men will purchase weed at least once a week. Jane’s Bakehouse is for the woman who “wants to get into cannabis” but is scared. Accordingly, the product is designed to seem maximally non-threatening: single-serve and available in flavors like birthday cake and brownie. How can cannabis be bad if the edible flavor is named “book club”? Kindred Wolf’s data suggests that Jane’s Bakehouse will appeal to women over 30 with more than one child. This is marijuana meets market research.

Planet 13 has only been open for two weeks, but Groesbeck says that the number of visitors is “in line with expectations.” Groesbeck and his co-CEO Larry Scheffler are both former politicians that represented Henderson, a city about 16 miles southeast of Vegas. (Groesbeck was mayor, and Scheffler was a councilman.) Now, they’re turning from politics to catch a trend and go in on a project that they hope will be a cultural and economic catalyst for not just one city, but all of southern Nevada. Ultimately, they expect 2,000 visitors a day when the dust has settled, 90 percent of which they expect to be tourists who want to check out the place and see what it means to have a high-end marijuana experience.

Like Burning Man, marijuana was once counterculture. It became accepted, then mainstream, then trendy. Soon, perhaps, it will be aspirational and expensive, a reversal of stigma and the opposite of its origins. Marijuana was Reefer Madness. Now that it could be for the wealthy buyer or for a fun girls’ night out, the possibilities, and profit, seem endless.